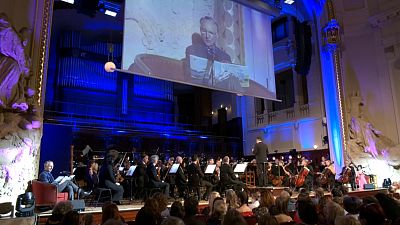 American writer Dan Brown, famous for "The DaVinci Code", was in the Czech capital Prague to introduce his first children’s book “Wild Symphony”.

He gave a reading, alongside the performance of the symphony which he has composed himself, played by the Czech National Symphonic Orchestra.

“I wrote “Happy Frog”, the first of the pieces when I was really a kid. I was out in the woods and I heard frogs in a lake croaking big ones and small ones, big bullfrogs, high and low and it sounded like music to me," he said speaking at the event in Municipal House Hall.

App for free music for everyone

His book has also another magical surprise, with a QR code to a free app containing the music for each short story in the book.

“It was my idea to make the music available through an app," Brown said.

"Mainly because this is for kids and as much as I like technology, the kids love technology. This was the seamless simple transparent way to deliver the music. And we thought it was important that the music was free to everyone.”

One year after publishing "Wild Symphony" in the United States, the book has been translated into 56 languages.

Watch the full report in the player above.