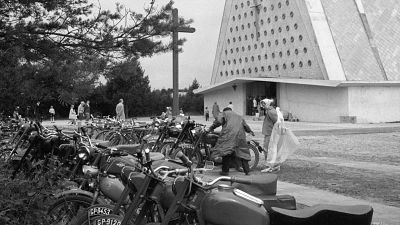 With a reputation for conservatism, one might not immediately associate the Polish church with an experimental approach to church design. But one would be very wrong.

In the 1980s, Poland built more churches than any other country in Europe and many of them are quite surreal in design. 3,587 churches were constructed in the Polish People’s Republic (PRL) between 1945 until it fell in 1989.

The iconoclastic and ad hoc splash across an often bland urban and rural landscape in Poland started after the ‘thaw’ of 1956 and gathered pace after the Second Vatican Council (Vatican II) – between 1962 and 1965.

Church architects were fascinated by postmodernism, which the writer Kuba Snopek saw as a reflection of the ethos of Solidarity.

“This kind of architecture needed an entirely new language of expression and used postmodernism, which was infiltrating from the West,” Snopek writes. It was also clearly a deliberate affront to the proletariat-minded Modernism of the Soviets.

While still under Soviet rule, priests would reach out to local craftsmen to construct the buildings with hand-laid masonry techniques in use since the Middle Ages. Snopek calls this fusion of style and execution Gothic Postmodernism. Outside of the vernacular of architecture, one might see a resemblance to a spaceship, a tulip, or a fountain pen, but whatever the eye beholds, the grassroots, unofficial origins of each church produced a wide range of styles.

“Every time we thought we had found some regularity or pattern, it broke down,” Izabela Cichońska, co-author with Snopek of the book ‘Day-VII Architecture: A Catalogue of Polish Churches Post 1945,’ says. "There is no logical connection between location and style, or even size of building.”

Below are five of such churches that caught the eye. There are many, many more that could be added.

Church of Our Lady, Queen of the World, Radom

One of the slowest-built churches: construction work began in 1982, and was completed in 2012.

The building, designed by Wojciech Gęsiak (in cooperation with Wojciech Fałat), was included in the 2010 poll by the Polityka weekly magazine on the list of the ten most beautiful Polish churches.

The church, standing in a large housing estate, among blocks of flats, from the outside resembles a tulip flower - this is caused by the central plan and the roof in the form of four spreading reinforced concrete shells covered with silver sheet.

Interestingly, the architect himself rejected associations with the flower. He said his inspiration was the Gothic, with its “soaring luminosity.”

St. Jadwiga Królowej was built in the Kraków district of Krowodrza from 1977 - 1990. The building was designed by a famous Kraków architect, Romuald Loegler. Although from the outside, the church has a complex body, composed of many elements, it was founded on a Greek cross plan.

The light concrete, from which the church is built, is diversified by details in blue: this is the color of the window frames, doors, but also the handrails at the stairs leading to the church.

In 2008, the German architecture critic, Dirk Meyhöfer, wrote about the Church of St. Jadwiga Królwa: "Building churches in times of modernity, especially in the 70s and 80s, was an ungrateful task in the West. Compared to the giants of history, modern churches had to fail, because their towers and other symbolism were taken from them and because everything that could be achieved in a sacred building, had been built earlier and in a better thought-out manner. Nevertheless, Loegler showed how, despite the uncertain budget and the correspondingly long design and construction period, the height and size requirements could be met without detriment to the whole. The result: a neo-Gothic church of completely unique nature with a composition derived from the age-old workshop of geometry.”

Church of the Exaltation of the Holy Cross and Our Lady of Healing the Sick, Katowice

"The authors' intention was to achieve a sense of solemnity, strength and persistence in the body and interior; an interior with an individual perception that is homogeneous in its entirety and very varied depending on the place, enriched with a differentiating play of external light, should foster a sense of unity in the community and individual contemplation in its place,” wrote the architects Henryk Buszko and Aleksander Franta about the project of the church in Osiedle Tysiąclecia in Katowice.

The construction of the church began in 1977, shortly after the most characteristic buildings, i.e. tall blocks, began to be built on the estate. The church, the plan of which resembles a fan, also refers to their semicircular shapes. The brick façades of the church curl and wave, spiral stairs lead to the entrances, and a bell tower resembles a serpentine.

The construction of the temple on the outskirts of Osiedle Tysiąclecia, considered a perfect example of modernist urban planning, was completed in 1993.

Church of the Assumption of the Blessed Virgin Mary, Władysławowo

The church in Władysławowo consists of two parts created in two different epochs. The first small temple was built here in 1932-36 in the neo-Gothic style. In 1957, the then parish priest obtained permission and began to expand the church so that the pre-war building became the presbytery of the new building. Built very quickly, in four years, the building was designed by Szczepan Baum and Andrzej Kulesza, famous architects from Gdańsk.

It is the first church built from scratch after World War II in Warsaw. Its construction began in 1950; the temple was consecrated in 1966. The author of this thoroughly modernist building is Władysław Pieńkowski, a well-known creator of many churches all over Poland.

The austere, simple, geometric shape of the church rises above the slope of the Warsaw escarpment - the location adds monumentality to the building.

Church design since its 1980s heyday has become far less iconoclastic, reflecting Poland’s shift from a renegade communist state to a functioning liberal democracy and free-market economy. The days of grand statements have seemingly passed.