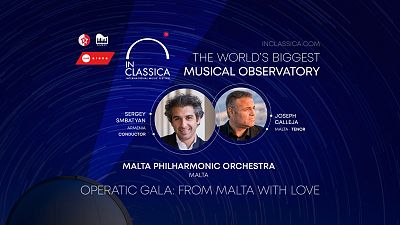 The InClassica International Music Festival 2021 features musicians who dedicate themselves to their craft with devotion and passion, and audiences whose love of classical music carries them to the abode of spiritual pleasure far from everyday life.

It is a place where astonishing young talent meets some of the world’s most established and famous musicians, and where new and remarkable careers are given a unique platform to shine — all this in dedication to music, and the shared ideals of friendship and international cooperation that reside at the heart of culture and the arts worldwide.

Internationally acclaimed for his vocal brilliance, elegant style, persuasive acting and impeccable taste, Joseph Calleja has become one of Malta’s most important musical ambassadors. For this spectacular gala concert, the renowned Maltese tenor and famed Metropolitan Opera star will perform some of the most hauntingly beautiful arias in the French and Italian repertoire, including the extremely demanding ‘Ah! Lève-toi soleil!’ from Charles Gounod’s ‘Roméo et Juliette’, and the tender ‘La fleur que tu m’avais jetée’ from Georges Bizet’s ‘Carmen’.

Giuseppe Verdi’s aria ‘Quando le sere al placido’ from the opera ‘Luisa Miller’ is among the biggest tenor hits of all time, with ‘Amor ti vieta’, taken from Umberto Giordano’s ‘Fedora’ famous amongst opera lovers, having been sung by all the great tenors, even though the opera itself is rarely performed outside Italy.

With influences ranging from opera, jazz, symphonic and Latin American music, Leonard Bernstein’s operatic ‘West Side Story’ is a highly eclectic musical. The famous aria ‘Maria’ ingeniously uses the tritone — an interval that was banned from music for centuries — at the very beginning of the aria to characterise Tony’s longing for Maria. With the hugely popular ‘You’ll Never Walk Alone’ from ‘Carousel’, and ‘Edelweiss’ from ‘The Sound of Music’, both written by Richard Rodgers, Calleja shows his talent for works outside of the operatic canon, with Sergey Smbatyan combining these iconic songs with the hauntingly beautiful ‘Intermezzo’ from Giacomo Puccini’s ‘Manon Lescaut’, and the charming orchestral piece ‘Charmaine’, that Ernö Rapée composed for the silent war-drama, ‘What Price Glory?’.

In addition to the appearance of Joseph Calleja, this performance will also feature Charles Camilleri’s Overture and Celebration from The Knights of Malta Ballet Suite, in a further celebration of the unique contributions to classical music by Maltese artists.