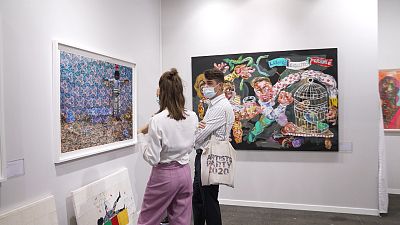 Art Paris 2021 has opened its doors at the foot of the Eiffel Tower in the monumental Grand Palais Éphémère designed by architect Jean-Michel Wilmotte.

140 galleries from all over the world have come to present their leading artists to both art professionals and the general public.

A time of introspection

It is a unique opportunity to take a look at contemporary creations and the art market itself. Guillaume Piens, the General Commissioner for Art Paris, describes the event as being both for insiders to the art world, like collectors, exhibition curators and museum directors, but also for the general public who can come to see "an exhibition that is embracing art since the end of the Second World War until today." He also highlights a new phenomenon which is the presence of large foreign galleries, mainly Anglo Saxon galleries that used to go to London but are now turning to Paris.

A guest curator has proposed a personal selection based on a theme. This year's theme is "Portraiture and figuration, A look at the French scene". According to the guest curator 2021, Hervé Mikaeloff, the emphasis "on the theme of portraits corresponds to our time, a time that reflects an uncertainty for artists and it's also a time of introspection for them and for their work." He also believes that art fairs today have taken on much more importance due to the current context.

After long periods of closures due to the pandemic, art professionals at the fair have expressed their joy at being able to physically exhibit their artists again and they are actively encouraging professional encounters.

Françoise Besson is a French gallery owner. She is present at this year's Art Paris. She says that it was very important for everyone to be back in Paris " to reconnect with both Parisian and European collectors". She also feels it's important to be in Grand Palais Éphémère, which to her stands for renewal.

The Grand Palais Éphémère was designed by architect Jean-Michel Wilmotte. It is a temporary building on the Champ-de-Mars. Its wooden framework makes it more ecological and reflects our times. The wood used for the structure comes from sustainably managed forests. It is estimated that the CO2 captured by the structure amounts to 1956 tons. The cover that encloses the building has strong acoustic, thermal and ventilation properties helping to reduce energy costs. The transparent fabric, visible from the outside, is made of mineral and non-petroleum-based polymers and therefore generated 90% less energy in the manufacturing process than glass would have. It is also entirely recyclable.

The building has been made to host major events usually held in the Grand Palais whilst the iconic building is being restored. It is a modular building and can be used in multiple configurations, so it is expected to be used for many different functions in the future.

Artists have come in large numbers from France, Europe and all over the world to show their work, particularly their creations produced during the harder parts of the last few years. One such attendee is the Polish graffiti artist and painter, Tomek Baran. During the pandemic, a cycle in his life that he calls 'Strinks', he created a series of paintings.

Three of them can be seen at Art Paris 2021. He is currently working on finishing the other six of the series. He believes it's good for people to see the work with their own eyes rather than on Instagram or online. Françoise Besson shares this feeling. "We've realised how essential art is, how important it is to share, to meet, to see the work", she explains. To her, at Art Paris "there's really a desire to welcome art lovers, all audiences and to enjoy everything the artists have prepared."

Art Paris 2021 is open to the public and to professionals until the evening of Sunday the 12th of September.