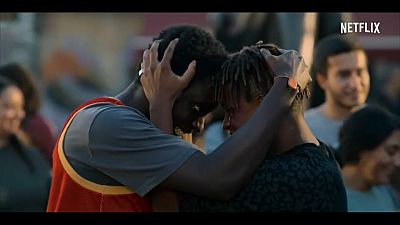 In Italy, a TV series with a predominantly black cast is breaking down stereotypes in a country where racist language and imagery are not uncommon.

Made by Netflix, "Zero" follows the antics of a young black Italian man with supernatural powers who helps solve mysteries and crimes.

"So many times when I was young, I couldn't find anyone similar to me in Italy, or who could represent what I am, and I had to look abroad," explained Giuseppe.

"In the world of today, even in Italy, there are a lot of second-generation blacks, and this community is pretty strong, and we are not represented in cinema.

"So, to be part of a series with a black story is a huge victory for me."

Since its launch in April, Zero has proved popular. The author and screenwriter of the series, Antonio Dikele Distefano, hopes it can be a vehicle for change.

"But I tell you, I am convinced that through these things - writing novels, the possibility of making a series - that things can change."

Netflix says the series is an example of its aim to develop homegrown drama, written, acted, and directed by local talent.

"For us in the Italian world, it has been emotional, and for me personally, a satisfaction, allowing me to feel good about myself," she explained.

"Zero" has been adapted for several European languages and worldwide distribution.