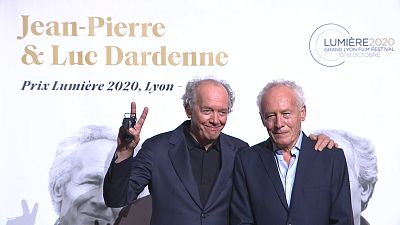 The actress Emilie Dequenne, discovered by the Brothers for their 1999 film Rosetta, which won the Palme d'or at Cannes, paid tribute to them:

"It's obvious that, with an identity that is specific to the Brothers, that they make cinema that’s unique in its field.

"May the Light be with the Brothers!"

The Brothers are double winners of the Cannes Film Festival's highest award, La Palme d'Or and authors of a body of work that will go down in cinema history.

They were greeted onto the stage at the festival with a song by their late Belgian compatriot Jacques Brel: 'La Valse à Mille Temps'.

Luc Dardenne, moved by the reception for himself and his brother Jean-Pierre, namechecked another Brel song to express his delight:

The Prix Lumiere – the Lumière Prize - is like the cinematic equivalent of the Nobel Prize for Literature.

The brothers spoke to Euronews about their connection to the Lyon-based Lumière brothers, the inventors of the early, ground-breaking cinematograph film camera - and the honour of receiving the Lumière Prize.

"This Prize is awarded to us in the city of Lyon, where cinema was invented, and it is given to us by the Lumière Institute.

"And since the Lumière were two brothers, it's extra special for us, as we're also two brothers.

"So, we can't help but think that there’s a kind of small link between the Lumière brothers and us!"

Luc appreciates the prize as a one-off and a career highlight:

"What's great about this prize is that it is unique. You can't get it twice.

" You can get other prizes twice, but you can't get the Lumière Prize again."

The Dardenne brothers are filmmakers who have always tried to make realistic films - and their characters are often taken from the margins.

Their latest film, which won an award at Cannes in 2019, Le Jeune Ahmed or The Young Ahmed tells the story of a radicalised youth who tries to stab his teacher, resonating with current affairs

The Lumière Festival also hosted 23 films from the Official Selection of the Cannes Film Festival 2020, which did not take place physically because of the ongoing COVID-19 pandemic.

Amongst those is 'Another Round' by Thomas Vinterberg, recently winning awards at the San Sebastian and London Film Festivals.

Vinterberg says the current crisis has heightened the value of events like Lumière:

"This festival is particularly important right now because people are hiding back in their sofas, and Thierry (Frémaux, director of both the Lumière Institute and the Lumière Film Festival) is fighting to get people back into the theatres, for this collective experience of darkness.

"And it couldn’t make more sense than doing that here, in this town of Lumière, where everything started."

Although the festival is grounded in the very roots of cinema, it's also looking to the future; it also previewed Slalom by French director Charlène Favier, which was also selected for Cannes.

Favier was delighted that Slalom was included:

"What a pleasure to get Thierry Frémaux's phone call announcing the official selection, that's a bit crazy for a first film...

"It gave us the seal of approval we needed to be a little bit more legitimate."

'Slalom' is a semi-autobiographical film about sexual harassment in sport, written years before the #MeToo movement, starring Jérémie Rénier, coincidentally another actor discovered by the Dardenne brothers.

And as tradition dictates at the festival, the Dardenne Brothers also shot their own homage to the Lumière brothers' first production 'Sortie de l'Usine Lumière à Lyon' ('Workers Leaving The Lumière Factory') at the exact same location used in 1895, with Emilie Dequenne on the luggage rack of a moped!