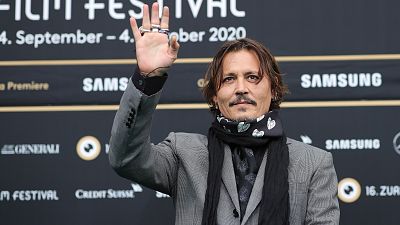 Johnny Depp has called the coronavirus "a plague" and told reporters that he has no idea what live events will look like once the pandemic is over.

The actor, who attended the Zurich Film Festival at the weekend, says he misses "performing with his band" most, because of the restrictions imposed by the spread of the virus.

Depp was at the Swiss movie extravaganza as the producer of Crock of Gold, a documentary about Shane MacGowan, best known as the lead singer of Anglo-Irish band The Pogues. Depp is also part of US "supergroup" Hollywood Vampires, with Aerosmith’s Joe Perry and Alice Cooper.

“I miss performing,” said Depp, “though performing is a strange word, I miss the instant connection with people who are there to share the experience. Because there’s no band, no music, no sound if there’s no people. So I miss the instant connection with people, I miss the responses and the exchange of emotions, and sure, after the horror of this plague, I don’t know what live shows will be like, or what sporting events will be like.

He also told audiences at the festival that music had been his first love, and "didn’t care" when he was first offered acting roles. Depp was in 80s glam metal band Rock City Angels before he found success in the movie industry.

“I dropped out of school and was playing nightclubs from the age of 15, working various jobs. I think having been a musician and that was the true love of my life, when it came to making a movie, I wasn’t an actor so I didn’t care. I made a couple of films, someone wanted to give me 1800 dollars a week, so I thought, ‘I’ll take it, I don’t care because this is not my thing.’”

Depp described himself as then "stuck on that road and realised that music would have to take a back seat" but added that since then, he’d made an effort to be "the punk rock actor".

Depp joked that the studio behind Pirates of the Caribbean, Disney, was "scared to death" when the first met Captain Jack Sparrow, arguably Depp’s best-known creation.

“They were nervous, they were afraid no one would understand a word Captain Jack said. I got calls from them asking, ‘Is he drunk? Are you drunk? What’s the thing with his hands?’

“I wasn’t discouraged in the slightest, it fuels me. I know that if they’re worried, I’m doing my job. When they asked me to bring it down, I turned it up.”

Crock of Gold: A Few Rounds with Shane MacGowan, directed by Julien Temple of Absolute Beginners fame, has already won a special jury prize at the San Sebastian film festival in Spain.

MacGowan, who has also collaborated with Kirsty MacColl, Nick Cave, Joe Strummer and Sinead O’ Connor, co-wrote hits such as The Fairytale of New York. Depp says of him that “he’s one of the greatest poets who ever existed".

“I wanted to do it because this is a man I’ve known for 30 years, and I love him. I want people to know that his words are very important. He’s got a bit of Bukowski or James Joyce - he’s up there in that pantheon, a giant of lyric and literature. We wanted people to know that.”

Depp’s appearances at both the Zurich and the San Sebastian Film Festivals marks his first public appearances since the high-profile libel trial in London this July when Depp took UK tabloid newspaper The Sun to court. The judge’s verdict is expected this autumn.

His attendance also marked the end of the 2020 edition of the festival, which gave a "Golden Eye" award to German superstar actor Til Schweiger and an "Icon" award to actress Juliette Binoche. The festival also honoured French director Maiwenn, with a focus on French filmmakers. Despite the pandemic, most of its honourees attended in person.

It also marked Switzerland’s first major event after lockdown. The festival estimates it had 68,000 visitors over ten days.

As Russia flexes its Baltic muscles, Sweden prepares for the worst