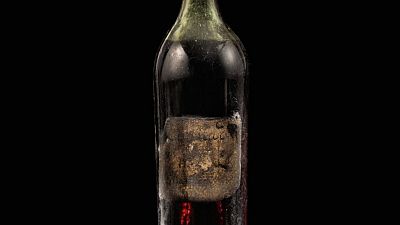 The bottle of amber elixir was produced in 1762 by the Maison Gauthier in France and is the oldest vintage Cognac ever to be sold at auction.

Only three such bottles from the 1762 vintage with the original labels still attached survive to this day. The bottle just sold is known as the trio's "Grand Frere" or "Big Brother" as it is the largest.

The Gautier Museum currently houses "Little Sister" while "Little Brother" was sold at auction in New York in 2014.

The trio has a remarkable back story. Produced the same year that Britain entered the Seven Years' War against Spain and Naples and Catherine the Great became empress of Russia, it has been held by the same family since the end of the 19th century.

According to the now-former owner of the bottle, his great-grandparents fostered an orphan named Alphonse, who left in 1870 to work in the Cognac region. He returned to his adoptive parents' home 10 years later with a cart loaded with Cognac bottles.

It is thought that Alphonse left the Cognac region after the vines were decimated by the phylloxera crisis which crippled wine and brandy producers at the time and that the bottle was given to him in lieu of wages.

Alphonse was sent to war in 1914 and never returned but his family carefully preserved his treasure in their cellars.

"The Gauthier 1762 is renowned and revered across the world as a Cognac that transcends the world of spirits collecting," Jonny Fowle, Sotheby's Spirits specialist said in a statement.

"This bottle represents not only an example of pre-phylloxera viticulture, but also of early cask maturation from the dawn of Gautier's production and even precedes the French Revolution. This bottle contains not only a superb brandy, but also Cognac's history," he added.

Banksy's 'Devolved Parliament' of chimps to be auctioned