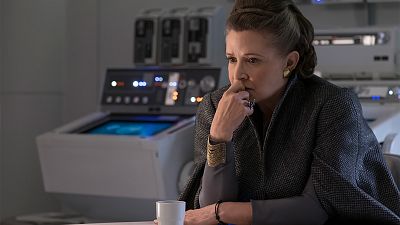 Disney revealed its much anticipated trailer for "Star Wars: The Rise of Skywalker," the final installment of the franchise's Skywalker saga story line.

The trailer dropped during halftime of "Monday Night Football," debuting on what would have been the late Carrie Fisher's 63rd birthday. The actress was best known for her role as Princess Leia in the famed franchise.

Fisher died in December of 2016 after going into cardiac arrest on an airplane from London to Los Angeles. Director J.J. Abrams said at Disney's D23 Expo in August that unused footage Fisher filmed before her death would be utilized in "The Rise of Skywalker," without CGI or digital animation, according to Variety.

"The character of Leia is really, in a way, the heart of this story," Abrams said. "We realized we could not possibly tell the end of these nine films without Leia. We realized that we had footage from 'Episode VII,' and we could use it in a new way."

Fisher trended on Twitter Monday as fans commemorated her birthday with tributes to her life. Billie Lourd, the actress' only child, posted a video to Instagram of her singing her mother's favorite song, "American Girl" by Tom Petty.

"Not that I'm some kind of grief expert by any means, but on milestones (or whatever you want to call them) like this, I like to celebrate her by doing things that she loved to do," Lourd wrote.

An old video of Fisher with her French bulldog Gary at a restaurant was also posted to the pooch's Instagram account.

"One of many dinner nights with the best mom ever," the video was captioned. "I miss you so much happy b day."

"Star Wars: The Rise of Skywalker" is scheduled for a theatrical release on Dec. 20, a week before the anniversary of Fisher's death.