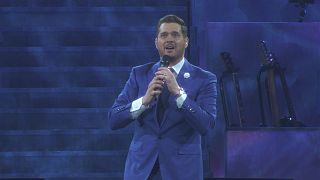 Michael Bublé is on his sixth concert tour "An Evening with Michael Bublé", the first in four years. The Canadian singer will perform many songs from his tenth studio album "Love" which was released last year.

The tour will feature nearly 100 performances in North America, Australia and Europe. Its set list contains a range of classics like "Haven't Met You Yet", "Home" and "Cry Me A River" as well as song from his new album "When I Fall In Love" and "My Funny Valentine".

The singer is known for his crooning baritone, taking American classics and reinventing them as his own. His signature style has earned him four Grammys and 60 million album sales.

Michael Bublé spoke to Euronews in Birmingham during his tour:

"I'm often more surprised that the American Songbook hasn't grabbed other people the way it grabbed me because it's so good."

His take on the most influential American pop songs from the 20th century has captured the hearts of his fans.

"A lot of these songs what they talk about is love and longing and heartbreak and sex. These are things that we can all understand and that's why 100 years later they're still relevant and so I love being able to take a song and to re-imagine it.”

His original songs have earned him recognition as well. Some of his most popular hits exceed one hundred million listens on Spotify. He has more than seven million monthly listeners on the platform.

"It's strange you know to look back and to hear "Home" or "Haven't met you yet" or "Everything" or "Lost", all these kind of songs that when I hear them now I'm taken right back to where I was and it's like another person, another lifetime."

Despite personal hardship over the last few years, Michael Bublé said he has taken something positive from it:

"In my life, I know that I've lived through times that were hard. And so it gives me a greater appreciation when times are good.”

"And I think part of living the right way is to try to be in the moment and do it with kindness and integrity."