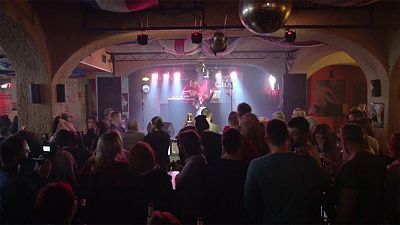 Sarajevo is the political, social and cultural centre of Bosnia and Herzegovina. But with a long and rich history of religious and cultural diversity, the city has become a symbol of the Bosnian war. Traces can be found everywhere.

The siege by the Bosnian Serbs lasted 1,425 days and cost many more lives. During this period, different groups clashed throughout the country: Orthodox Christian Serbs, Muslim Bosniaks, and Catholic Croats. Over two decades since the war and reconciliation remains difficult. Euronews spoke to Elma Hašimbegović, the director of the Historical Museum of Bosnia and Herzegovina.

“You have three ethnonational sides and three ethnic groups which base their narratives and national building process on the war. Everything in this society is training young people to be professional nationalists.”

Divanhana is a successful Sevdah traditional folk music band. Formed in early 2009, by a group of students from the Sarajevo Music Academy.

”We had a large artistic gap in our recent history in the 90ties because of the war and everything after that we just feel the needs for young people to cherish and to promote the traditional music of Bosnia and Herzegovina, we play modern arrangements.” Divanhana musician Neven Tunjić told Euronews.

In the world of fashion, the designs of Adnan Hajrulahović Haad are shown around the world, even Hollywood star Angelina Jolie has been dressed by him.

”I always try to bring in traditional elements in my designs. In a way that connects them with a younger generation, because tradition is about identity and if we do not keep up our authentic roots we get lost in the global market.”

The Regional Cooperation Council is an international framework of 13 East European States that wants to boost prosperity and growth through regional action in South Eastern Europe.

”We share history, we share European roots, it has been quite difficult for some years due to the war in former Yugoslavia but for the whole region there are changes, transformation, democratic changes - I think that culture could bring together all those values that had been kind of neglected in the region,” said Majlinda Bregu, the secretary general of the Regional Cooperation Council. Its changes and shifts that have inspired a glut of new talent in the area.

Bands like the Bosnian avant-garde dub rock group Dubioza Kolektiv are a globally celebrated. They are equally known for their crossover style, as they are for their socially conscious songwriting. Their music videos receive over 10 million views on youtube. Group member Brano Jakubović musician spoke to Euronews about the importance of having a message.

”In this kind of young country and young society, I think it's very important to be politically active, this is why we decided to form the band that will be politically active. We would through this time be part of protests and organise protests - I mean we try to be a big part of the civil society in general.”

A short stopover at Srebrenica, we visit the SOUND WAVE music club where two female Belgian rappers Nepthys and Gloria Boateng, and Bosnian perform with mega rap star Frankie and even some Serbian local rappers. Frankie spoke to us about the uniting nature of the region’s thriving hip hop scene.

”Hip hop in Balkans was actually the first to go to Serbia, Croatia and bring those artists to us, so we were the first to start to knock on this walls and to build again bridges which were broken.”

_You can catch many of the music acts mentioned in this reported piece at the next Balkan Trafik! Festival in Brussels at the end of April _