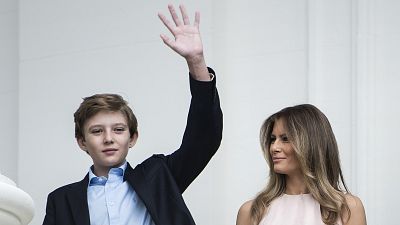 Barron Trump waves while standing with US First Lady Melania Trump and US President Donald Trump during the Easter Egg Roll on the South Lawn of the White House April 17, 2017 in Washington, DC.   -   Copyright  Getty Images
By Eun Kyung Kim  with TODAY Lifestyle  •  Updated: 21/03/2019

Barron Trump, the president's youngest child, is officially a teenager.

His father did not recognize the birthday on Twitter, although the president was active on the platform throughout the day.

The AP reported that Wednesday marked the first day of spring break at the Maryland private school Barron attends, so he and the first lady kept to tradition by spending it at their Palm Beach, Florida home.

Barron is the only child of the president and the first lady, but Trump has four grown children from his previous marriages.

Barron is not the only recent teenager to call the White House home.

President Obama's two daughters, Malia and Sasha, both turned 13 while their father served in office.

President George W. Bush's twin daughters, Barbara and Jenna, were both 19 and in college when he took office in January 2001.