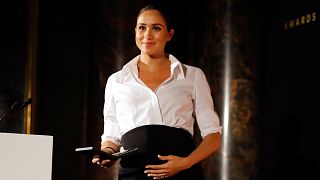 The Duchess of Sussex is making headlines for a stateside appearance over Presidents Day weekend, what's believed to be her first trip to the U.S. since moving across the pond to marry into the British royal family.

The former Meghan Markle, who is about seven months pregnant with her first child with Prince Harry, reportedly arrived in New York City on Friday for a low-key, five-day stay that includes an intimate baby shower with close friends.

While many are interested in the duchess's agenda (a visit to Ladurée bakery — count us in!), others are wondering: Is it safe for a pregnant Meghan to be traveling by air?

To answer this question for other expectant mothers, we turned to Dr. Jennifer Aquino, an OB/GYN and clinical assistant professor in the department of obstetrics and gynecology at NYU Langone Health in New York City.

"For pregnant women who are flying, the concern is a risk of pregnancy complications while on board a plane," Aquino told TODAY. "The majority of complications happen in the first or third trimesters, but can also happen at any time."

One risk Aquino cited was if a preterm delivery (less than 37 weeks) were to occur on a plane and there were no doctors or nurses on board.

Generally speaking, though, according to recommendations by the American College of Obstetrics and Gynecology, as long as the mom-to-be and the fetus are healthy, a woman can travel safely until she is 36 weeks pregnant.

However, some airlines have their own policies about permitting pregnant women to travel.

For example, JetBlue requires a pregnant customer traveling within seven days of her due date to provide a doctor's certificate no more than 72 hours before departure. Expecting mothers should check if their airlines have similar policies.

Dr. Aquino also noted that a woman's risk of blood clots increases during pregnancy. So if the planned trip is lengthy, mothers should take precautions: Drink plenty of water, dress in loose-fitting clothing and regularly get up to walk and stretch.

In terms of travel destinations, Dr. Aquino says women should avoid areas with risk of Zika infection. This came up early in the Duchess of Sussex's pregnancy when she and Prince Harry traveled in October to Australia, New Zealand and the Pacific Islands. Check out the CDC's Zika world map ahead of time.

As for other helpful tips, research local hospitals in the area you're traveling. It's also important for mothers to talk ahead of time with their OB/GYNs about when to seek emergency care. Ask about symptoms — such as severe vomiting, vaginal bleeding or abdominal pain — and what to do if they occur.