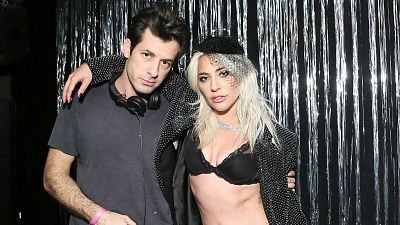 The stars were out to celebrate the Grammy Awards on Sunday night with showstopping performances from Lady Gaga, Miley Cyrus, Alicia Keys and more.

But the fun really started after the show when everyone can relax a bit — including with what they wear.

The stars ditched their fancy gowns from the red carpet and show off their personalities in fun party attire.

Here's what some of the top celebrities changed into after the Grammys.

Lady Gaga never disappoints when it comes to style, and her after-party look was yet another example.

The singer and actress, who recently dyed her hair silver, is never afraid to go a bit skimpy, but she may have taken it to the next level at Mark Ronson's "Club Heartbreak" post-party. She wore a black bra and panties with some fishnet hose and a light jacket.

Known for her wild style and her often vibrant hair colors, Katy Perry also hit the Club Heartbreak after-party in a more understated look for the singer.

Her ankle-length, strapless gown featured sequins and puffy black sleeves, which she paired with strappy sandals and long, dangling earrings.

Julianne Hough was looking elegant with a black jumpsuit and matching clutch. The dancer, actress and singer also attended Steven Tyler's Grammys after-party with her husband, Brooks Laich. She sported a straight blond bob with just a few bangles on her wrist.

Singer and actress Ashley Tisdale was also understated in a black ensemble with silver heels and hair swept to one side. Her dress was mostly see-through with the fabric draped over a halter top and bottoms. Tisdale, whose hair was pink not so long ago, attended the Republic Records after-party in Beverly Hills.

At age 60, Sharon Stone is still turning heads with her choice of attire. The actress was photographed wearing a mesh-like, black, ankle-length dress that hinted at her svelte figure beneath. Stone was another celebrity that filled the room at Steven Tyler's post-Grammys bash.

Hailee Steinfeld stole the show with an eye-catching get-up that came complete with a feather-filled, tutu-like bottom on her minidress. Steinfeld was one of many at the Republic Records after-party.

At Universal Music Group's after-Grammy bash, Aisha Tyler was looking comfy in some white loafers paired with an almost camouflage-print ensemble. The actress paired a sparkly gray jacket and a chunky gold necklace with her outfit and was even spotted wearing shades at the event.

Pop star Dua Lipa, who won a Grammy for best new artist, was dazzling in white at Universal Music Group's party. The dress had a seductive slit up to the hip to show plenty of leg, as well as her glittery booties. She topped off the look with giant hoop earrings.

Mobile libraries restart for the first time since Taliban takeover