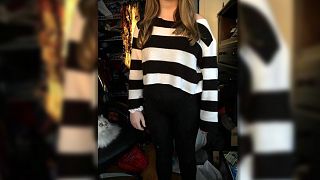 School officials have apologized to a 13-year-old student after calling her sweater inappropriate for the classroom.

On Jan. 30, eighth-grader Samantha Wilson was pulled out of her science class at Irvington Middle School in Irvington, New York. A teacher claimed her outfit violated the school dress code because it exposed her midriff and a bra strap.

Wilson was surprised and upset, because she had worn the striped sweater to school several times before without any trouble. After a half-hour meeting with the assistant principal, she felt so self-conscious about the sweater that she wore a coat for much of the rest of the day.

"Today my 13-year-old sister, an eighth grader at Irvington Middle School, wore a sweater to school," she wrote in the petition, which has garnered more than 800 signatures as of Feb. 11. "She was devastated about being called out, and missed an entire period of science (where a lab was taking place) to speak with the assistant principal about her 'inappropriate dress.' … The only lesson she learned today is that she needs to cover up her body, otherwise she will be pulled from class and humiliated."

The district's dress code states in part that "extremely brief garments such as plunging necklines (front and/or back), micro-minis, short shorts, bare midriffs, and see-through or otherwise revealing garments are not appropriate."

"The only lesson she learned today is that she needs to cover up her body, otherwise she will be pulled from class and humiliated.”

Cydney, a senior at Irvington High School, acknowledged in the petition that her sister was "technically breaking a rule," but added that "it is a rule that can and should be changed."

"I really can't fathom why the belly button of any individual young person would be considered inappropriate, so I'm not sure why that's written into the dress code," she told TODAY Style.

Cydney said she herself was "dress coded" in middle school for a camisole that showed too much of her back.

"Most of my friends have stories from middle school about times they were called out that have stuck with them for a really long time," she said. "So, it's definitely something that ... isn't an isolated incident and it's time for it to be addressed."

On Feb. 1, district superintendent Kristopher Harrison said in a statement that school officials want to work with "our students and stakeholders" to examine the current dress code.

Harrison also sent a letter to parents on Feb. 5 stating that "we are aware of the concern regarding our district's present dress code and we will begin the discussions to make changes, if necessary."

Samantha and Cydney's mom, Jamie Wilson, said she was glad to see the school respond proactively to the situation.

"We are very happy to see the quick response from the leadership at our school," she said in an email to TODAY. "This was in fact the case of a child wearing a boxy sweater and not one that was tight-fitting or a child trying to be provocative so it's clear to everyone that these types of inconsistencies must be addressed."

Cydney and Samantha also recently met with the principal and the assistant principal of Irvington Middle School, and they apologized in person to Samantha.

"We believe in the importance of students participating in the discussion of the dress code and the code of conduct because it will help students to develop a sincere sense of ownership and increase their engagement in our community," the Irvington school district said in a statement to TODAY.

Now, Cydney says she hopes the school will follow through and work with students to revisit the dress code. She thinks it would be helpful for the school to organize focus groups of middle school and high school students to discuss the dress code, so students can have a role in revising the guidelines.

"I really would love to see them change the title from a 'dress code' to 'suggestions for appropriate dress' or 'suggestions for clothing,'" Cydney told TODAY. "I don't think it's necessary to regulate so heavily what students are wearing, especially because school is a time when you find yourself and who you're supposed to be … I think it's important that we're able to express ourselves in an appropriate way there."

She added that in general, when schools police young girls for their "inappropriate" outfits, it can send a damaging message.

"It tells them that their education is not as important as (that) of other students around them," she said. "I think it's really important that we stop sending the message that young girls need to cover up their bodies. I think it's an antiquated message. And we're in 2019, and in the 21st century, and it's time to move forward and realize that a girl's body is not something to be ashamed of."