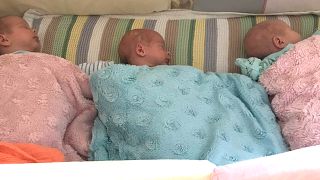 For seven long years, Beata Bienias and her husband Powell had been trying to have a baby.

"I never thought I would have a problem with getting pregnant," the 36-year-old laundry and linen service worker in Corsham, England, told TODAY via email.

Bienias has polycystic ovarian syndrome, and she also was overweight. She had no idea that would make it so difficult for her to get pregnant. Doctors advised her to lose weight, so she shed 70 pounds — but still she struggled. She eventually decided to try in vitro fertilization (IVF).

When the doctor harvested her eggs for fertilization, she cried tears of joy because she felt so excited about being a mom. Doctors told the couple not to have sex during the IVF process, but they broke the rules for Powell's birthday. They thought little of it — after all, they had tried having children naturally for seven years and it didn't work.

Shortly after, doctors implanted the embryos. Soon after that, Bienias received the news she had been waiting for for almost a decade: She was pregnant.

"We all discovered the wonderful news," she said.

But when she went to her first sonogram appointment, the technician saw something surprising: Triplets.

"We both were in shock and we looked (at) the monitor with disbelief, just wondering who put (three babies) there," said Bienias, who is originally from Poland. "Straight away I called my mum and then I started crying saying, 'There's three inside me.'"

Further examination revealed another shock: Only one fertilized embryo had implanted. The twins were conceived naturally.

"This is so ironic after trying for so long, and when we got the treatment we conceived naturally," she said.

Dr. Christine Greves — a doctor at the Center for Obstetrics and Gynecology in Orlando who did not treat Bienias and can't comment specifically on her case — said that natural and IVF conception can happen concurrently.

"One can conceive naturally when undergoing IVF treatment ... and the implanted embryo can take," she told TODAY. "It is possible."

Though she noted that it's not common.

"It happens very rarely," she explained. "A lot of the people who seek IVF have difficulty getting pregnant."

Bienias delivered the babies, Amelia, Matylda and Borys, on Dec. 13, 2018 when she was 34 weeks pregnant. Mom and babies spent a week in the hospital and then returned home, where the triplets have been growing steadily as the new parents adjust to caring for multiple infants.

"It can be difficult and hard, but it's more than 100 percent worth it," Bienias said. "I'm tired after a night but when I look into these little faces, it melts my heart."