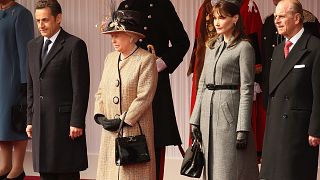 The queen carried the handbag when she met French president Nicolas Sarkozy and his wife, Carla Bruni-Sarkozy, in 2008.   -   Copyright  Peter Macdiarmid Getty Images
By Lindsay Lowe  with TODAY Lifestyle  •  Updated: 09/01/2019

Throughout her reign of more than six decades, Queen Elizabeth II has chosen outfits for countless occasions, from meeting foreign dignitaries to attending royal weddings and christenings. So, when it comes to accessorizing, it makes sense that she favors versatile, classic pieces that can pair with almost anything.

Case in point: this black handbag, which she has worn regularly for at least 50 years.

As the U.K.'s Daily Express recently pointed out, the queen has been rocking this handbag since the late '60s. The purse with a distinctive metallic embellishment near the top was made by Launer, a British brand that has produced several of the queen's favorite handbags over the years. (When it comes to umbrellas, she aims to match it to her outfit.)

She carried the bag when she met President Richard Nixon and Pat Nixon in 1970.

She also sported the purse when she greeted President Bill Clinton and Hillary Clinton at Buckingham Palace in 2000.

The bag was the perfect accessory for her cheerful, checked ensemble at the Gold Cup race meeting at Cheltenham Racecourse in 2003.

And she carried the bag during an event in London in 2004.

Besides being practical and stylish, Queen Elizabeth's beloved handbag may also come in handy for sending secret messages. According to royal historian Hugo Vickers, the queen sometimes uses her handbag to get out of awkward social encounters.

When she is out and about, she typically carries her handbag over her left arm. However, if she switches the bag to her right arm, it's a subtle hint to her staff that she would like to be rescued from the current conversation.

She wore her trusty Launer bag on her left arm when she met French president Nicolas Sarkozy and his wife, Carla Bruni-Sarkozy, in 2008.

She also carried the bag as she reviewed the King's Troop Royal Horse Artillery in London's Hyde Park in 2017.

The purse was even immortalized in an official royal portrait of Queen Elizabeth, unveiled last year.

A classic accessory never goes out of style, and the queen's go-to handbag is now part of royal history!