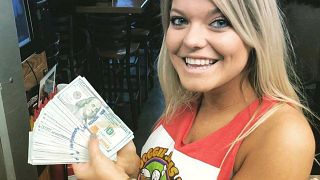 Waiters and waitresses work on faith. They bring people their food and drinks, and hope to receive a fair tip at the end of their service. While some people can be nasty when it comes to tipping the waitstaff, others are super generous and leave a 100 percent tip for good service.

On Friday, one person took things to another level and gave an unsuspecting waitress a $10,000 tip — just for serving water.

Upon arriving to a 4 p.m. shift at Sup Dogs in Greenville, North Carolina, Alaina Cluster thought it was just another day of waitressing. The owner, Brett Oliver, asked her to take a table of two who ordered waters and needed a minute to look over the menu, Cluster told TODAY Food.

But when Cluster returned to the table, they were gone.

"There was just a note written on a napkin that said 'the waters were great,' and $10,000 in cash," Cluster told TODAY Food. "I thought someone was playing a joke on me. I wasn't that excited, I just said, 'What? What is this?'"

When Oliver said to Cluster it must be her tip, the shock began to set in.

Cluster then saw a couple guys with a camera at a nearby table out of the corner of her eye. When she asked them if they saw what happened, they told her to subscribe to the YouTube channel of someone who goes by the name of MrBeast and had been "going around blessing servers' days."

"They told me that all the money was for me," Cluster told TODAY Food.

MrBeast is a YouTuber with nearly 9 million followers who does ... bizarre ... things and films them. For example, for one filed stunt, he bought $30,000 worth of scratch-off lottery tickets just to see what he'd win.

He also once documented how many toy cars it takes to pull an actual car.

MrBeast has also purchased "things that shouldn't be sold on Amazon," such as guns, and then used them to shoot targets under water.

But, according to his YouTube channel, MrBeast performsrandom acts of kindness as well as just plain random acts. And Cluster was the target of his latest stunt.

In addition to working part time at Sup Dogs, Cluster is a nursing student at East Carolina University. She's secured a job at a local hospital after graduation in December. Even though the $10,000 tip could give the nearly-graduated college student a financial security cushion, she refused to take all the cash for herself.

"I can't take all this money," Cluster told TODAY Food. "We have to split it up."

"That could've been like anybody on my shift, ya' know," she said. "I didn't do anything to deserve that much money. I wanted to split it up and be fair with everybody."

Cluster ended up giving $200 to each person working during her shift that day, $100 to the rest of the Sup Dogs servers and kept the remaining $800 for herself.

As of Tuesday, the video of Cluster is not yet up on MrBeast's YouTube channel, but we can't wait to see the generous act play out.