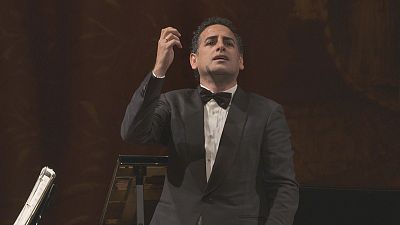 He's famous for the great tenor arias. However at a performance in Argentina, opera star Juan Diego Flórez managed a balancing act between classical music on the one hand and Latin American classics on the other, with Vincenzo Scalera joining him on piano.

Juan Diego Flórez feels at home on the world's most important stages. But performing a concert at the Teatro Colón in Buenos Aires is, for the Peruvian singer, like going back to his roots. Apart from the great tenor arias, Floréz triumphed with songs from his childhood.

"This is fantastic to come back to Latin America, I come back to my land, let's say my extended land... Our music is so much from the bottom of the heart," he says.

It is music that he learned from his grandmother and his father, like "José Antonio", a song by Peruvian singer Chabuca Granda.

"In Chabuca Granda love is not evoked so much. It's about the mountains of Peru, it's about somebody else's love maybe. Or in the case of "José Antonio" it's a horse and the rider. So you are like reading a little story."

After years dedicated to classical music, it was only with the birth of his first child that Flórez took his guitar back out of its case.

"I felt wow - I felt coming back everything from my youth and those great pieces of music coming back to me suddenly and remembering all the words. "Volver" is a tango by Carlos Gardel. All the music by Gardel is incredibly beautiful, full of melodies made for a tenor, they are made for that kind of singing."

It is music that is a part of his past, and now present, and music that deals very much with the past.

"It's very nostalgic, very sad, let's say, emotional. You know, coming back to the place you were from. It's one of the best tangos ever written."

Tango, insists Juan Diego Flórez, has basic ingredients that have to be included.

These are feelings that are also central to so-called "high art", as well, he maintains.

"This is what opera does to people when they get goosebumps, when a singer is singing a certain aria at a moment in an opera and the people are crying instantly. It's a combination of great music, great words and a great interpreter who knows how to push, how to throw it out to the public."