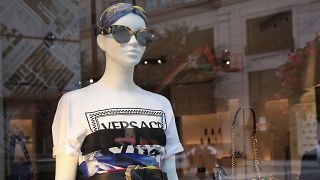 Merchandise is displayed in the front window of a Versace store in Chicago. Michael Kors is reported to have purchased Versace for $2 billion.   -   Copyright  Scott Olson Getty Images
By Lindsay Lowe  with TODAY Lifestyle  •  Updated: 26/09/2018

There's been a major shakeup in the world of luxury fashion.

The parent company of Michael Kors is buying Versace, one of the world's leading luxury brands, for approximately $2.12 billion.

Meanwhile, Versace will keep its name and designer Donatella Versace will continue to oversee the legendary Italian fashion house.

"Donatella's iconic style is at the heart of the design aesthetic of Versace," John Idol, chairman and CEO of Michael Kors' parent company, said in a statement. "She will continue to lead the company's creative vision. I am thrilled to have the opportunity to work with Donatella on Versace's next chapter of growth."

Versace has long been a go-to luxury label for celebrities including Angelina Jolie, Jennifer Lopez and Madonna, to name a few.

Michael Kors is best known for its leather handbags and other accessories, and some analysts say this deal will allow Michael Kors to break into an ultrahigh-end market.

"By Michael Kors acquiring Versace, this is one way the company can get back into the luxury lane," retail analyst Hitha Herzog told TODAY.

Reactions to the deal were swift and often critical on social media, with some people worrying that the acquisition would dilute the Versace brand.

However, Donatella Versace said that the spirit of Versace will not change, and that this move will only help expand the luxury brand's reach.

"This is a very exciting moment for Versace," she said in a statement. "It has been more than 20 years since I took over the company along with my brother Santo and daughter Allegra. I am proud that Versace remains very strong in both fashion and modern culture … Santo, Allegra and I recognize that this next step will allow Versace to reach its full potential. … My passion has never been stronger."

The deal includes plans to expand Versace's revenues by $2 billion globally, to expand the brand's men's and women's accessories and footwear offerings and to open about 100 new stores around the world.

"I think this just opens up the market for people like us in the United States to be able to wear a brand like Versace," Herzog said.