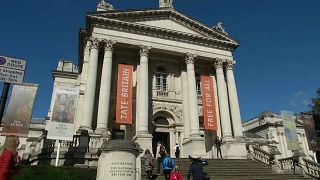 Experimental video dominates this year's nominations for the UK's Turner Prize. The Tate Britain is displaying the work of the four nominees who all work with moving images, from 35mm film to smart-phone-shot movies.

The Turner Prize, named after the English painter J. M. W. Turner, often makes the news not just for the art but for the public's reaction to it. It aims to showcase the best of contemporary British-based art. The winner of the prize will be announced at an award ceremony beginning December and the exhibition runs until 6 January at Tate Britain in London.

Naeem Mohaiemen: Encompassing films, installations, and essays, his practice investigates transnational left politics in the period after the Second World War, the legacies of decolonisation and the erasing and rewriting of memories of political utopias.