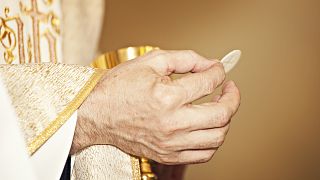 A handful of churches in South Carolina are offering parishioners the option to have gluten-free bread during the Holy Communion, but the Vatican says gluten is actually a necessary part of the sacred ritual.

The new offering has since sparked a debate among those who suffer from gluten intolerance and certain bishops.

Celiac disease is an immune reaction to gluten (a protein found in wheat, barley and rye) that can be damaging to the intestines and causes unpleasant systems like nausea and diarrhea. For many of the approximately 3 million Americans who suffer from the disease, it is a challenging road that requires carefully monitoring everything eaten (and gluten happens to be in a lot of products).

"It's an easy enough gesture to do to extend a hand of welcome," Rev. Adam J. Shoemaker, who serves as rector at St. Stephen's Episcopal Church, told The Post and Courier.

Holy Communion, or the Holy Eucharist, is a Christian tradition where members of the congregation eat a small piece of bread or wafer along with a sip of wine to represent the body and blood of Jesus Christ.

However, not all churches think gluten-free Communion wafers are a good idea. The United States Conference of Catholic Bishops confirmed to TODAY Food that nothing has changed on the Vatican's stance released this summer on types of bread provided during Holy Communion.

"For bread to be valid matter for the Eucharist, it must be made solely of wheat, contain enough gluten to effect the confection of bread, be free of foreign materials, and unaffected by any preparation or baking methods which would alter its nature," the guidelines on celiac disease and alcohol intolerance state. "The amount of gluten necessary for validity in such bread is not determined by minimum percentage or weight, though hosts which have no gluten are considered invalid matter for Mass."

The USCCB does approve low-gluten wafers created for those with gluten sensitivities, and provides a list of distributors around the U.S. One of these producers, the Benedictine Sisters of Perpetual Adoration, have been making low-gluten altar breads since 2004.

Alessio Fasano, director at the Center for Celiac Research and Treatment at Massachusetts General Hospital in Boston, tested the low-gluten wafers and found that they contained less than .01 percent gluten content in 2004 and found that "someone diagnosed with Celiac Sprue Disease would have to consume 270 wafers daily in order to reach the danger point."

In 2016, a new test showed the gluten content in the wafers was less than .001 percent.

Andrew Menke, executive director of the Secretariat of Divine Worship, told TODAY Food that some parishes may be using these types of Vatican-approved wafers with minute gluten contents and calling them "gluten free," though St. Stephen's Episcopal Church could not be reached to comment on where they source their altar breads.

Menke also said individuals with celiac disease are welcome to "receive the Eucharist under the form of wine only" should they be worried about a negative reaction to any gluten.