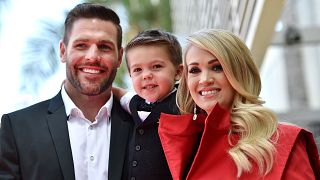 Carrie Underwood got sweet support from the boys in her life when she received a star on the Hollywood Walk of Fame.

Underwood, dressed in a striking red trenchcoat that showed off her baby bump, fought back happy tears as she recalled her dazzling rise from small-town country singer to Nashville mega-star and winner of seven Grammys, six CMAs and a whopping 14 ACM awards.

"How is this my life?" she marveled. "How does a girl from Checotah, Oklahoma, end up with a star on the Hollywood Walk of Fame? I'll tell you how — belief. I've been so blessed in my life to have ... so many people who believed in me."

The "American Idol" winner thanked Fisher, whom she married in 2010, for supporting her, and gave a special shoutout to Isaiah, calling him the "best thing" the couple has ever done.

"I met an incredible man, Mike, who thinks I'm so much better than I actually am in every way," she said. "Thank you for believing in me as a human, as a wife, as a mom and supporting me through all of this. He believes in me, and we had another little man that believes in me too. Isaiah Michael, I love you so much. You're the best thing we ever did — the best thing. I love you, and I'm proud of you, and I believe in you too."

"This is absolutely amazing and a dream come true," Underwood gushed. "That's how this happens -- belief. So believe in people, believe in yourselves and just thank you."