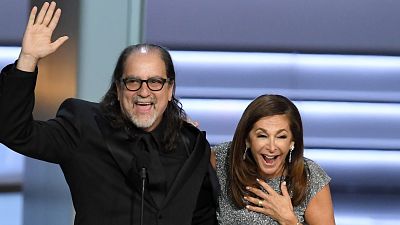 Glenn Weiss (L), winner of the Outstanding Directing for a Variety Special award for 'The Oscars,' and Jan Svendsen react after getting engaged onstage during the 70th Emmy Awards at Microsoft Theater on September 17, 2018 in Los Angeles, California.   -   Copyright  Kevin Winter Getty Images
By Gina Vivinetto  with TODAY Lifestyle  •  Updated: 18/09/2018

Love was in the air Monday night at the 70th Primetime Emmy Awards — thanks to a romantic onstage marriage proposal!

While accepting the award for best director for a variety special for this year's Oscars telecast, Glenn Weiss proposed to his girlfriend, Jan Svendsen.

It all went down when Weiss took to the stage to accept his statue and dedicated it to his late mother, who passed away only a few weeks ago.

The emotional bride-to-be promptly burst into tears while Hollywood stars all around her leapt to their feet to cheer the couple on.

Before long, Svendsen made her way to the stage, too, where Weiss got down on one knee.

"This is the ring that my dad put on my mom's finger 67 years ago," Weiss said before turning to the camera to joke to his siblings watching at home, "Dad knows I have it, OK?"

"I want to put this ring that my mom wore on your finger in front of all these people and in front of my mom and your parents watching from above. Will you marry me?" Weiss sweetly asked.

Congrats to the happy couple on their award-winning proposal!