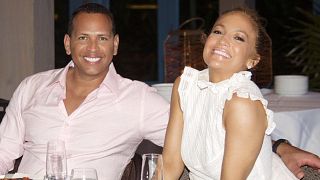 Usually Alex Rodriguezis the one getting served meals at fancy restaurants — often right alongside his girlfriend, Jennifer Lopez.

But after a big losing a bet to actor Mark Wahlberg, the former New York Yankee tied on an apron to work at a Wahlburgerslocated near Fenway Park, home of the Boston Red Sox, on Sunday.

In August, A-Rod vowed that he'd work at the restaurant if the Red Sox beat the Yankees since the two East Coast teams have a storied rivalry. Unfortunately for for the former Yankee, Boston swept New York by winning the first four games of the series — and A-Rod had to pay up.

"Ready to honor my promise," the athlete wrote on Twitter before he started his Sunday morning shift at the restaurant, which is owned by Mark's brother Paul.

The all-star player got to work at the family-owned fast food joint, calling out orders to the kitchen and even answering the phone.

To finish up the job, he even wiped down tables, mopped a bathroom floor and served patrons (yes, even local Red Sox fans!) their food with a smile.

"Today, I had to do a little bit of everything — greet customers, flip burgers, clear tables, and yes, mop the bathroom floor," Rodriguez said on Instagram. "But what I thought was going to be a tough day turned out to be a day I really enjoyed."

Another Wahlberg brother got in on the fun, too. "If JLo loves A-Rod, then we love A-Rod," Donnie tweeted.

Even though he was in enemy baseball territory, Rodriguez said he was surprised by how well he was received. "The people in New England were incredibly hospitable," he wrote.

Overall, it was a surprisingly good day for Rodriguez, who used to get booed in a major league way at Fenway Park.

Said the former baseball star, "I was grateful for the way I was treated, and hey, I even got a free lunch in the deal."