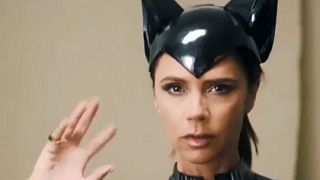 Victoria Beckham may have vowed to never wear her famous Spice Girls catsuit again, but luckily for fans, she's gone back on her word in a big way.

In a hilarious new video for British Vogue, the fashion designer resurrects her slinky feline look from the Spice Girls' 1996 "Say You'll Be There" video — and has a grand time poking fun at her girl group past.

In the documentary-style video, called "Victoria Beckham: A Decade of Elegance," the magazine's editors prepare a photo shoot to celebrate 10 years of Beckham's cutting-edge designs.

But just as the Vogue teams start gushing over the simplicity of Beckham's minimalist designs, the former Posh Spice hauls to the set a few surprise looks from yesteryear — namely, her black latex catsuit — now with new cat-eared headpiece — her iconic strapless black minidress, the Vivienne Westwood wedding gown she married soccer star David Beckham in, even the famous thrones from their gala wedding ceremony!

"What I want, what I really, really want," she tells him, "is me and four other women — one, bit of a sporty athleisure direction, another one that's younger, pink, pigtails. One that's very glamorous, full-on leopard print, and then another one that's super-super sexy: big boobs, red hair, that kind of thing."

And the ideas keep coming. "What about me dancing inside a space pyramid?" Beckham asks. "Followed by a chain-mail bikini?"

When a confused Enninful acts startled by the designer's new direction, Beckham puts up her hand to shush him.

"I'm giving you everything. All that joy can bring. This I swear. And all I want from you is the promise that... you will at least give it a shot," she tells him.