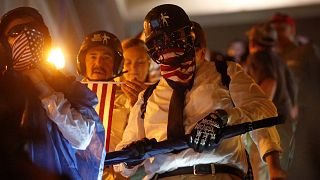 Supporters of white nationalist leader Jason Kessler arrive to take a subway to leave the area after a Washington, D.C. rally marking the one year anniversary of the 2017 Charlottesville ?EUR~Unite the Right?EUR(TM) protests, while en route to Vienna, Vir   -   Copyright  Reuters
By Meghan Holohan  with TODAY Lifestyle  •  Updated: 17/08/2018

After Pearce Tefft discovered that his son, Peter, marched in the Unite the Right rally in Charlottesville, Virginia last year, Pearce knew he could no longer remain silent. In a moving letter that went viral, the Fargo, North Dakota man disowned his son for being a Nazi.

"Peter Tefft, my son, is not welcome at our family gatherings any longer. I pray my prodigal son will renounce his hateful beliefs and return home. Then and only then will a lay out the feast."

The Unite the Right rally was a gathering of white supremacist groups in Charlottesville, Virginia on August 11 and 12, 2017. The march became violent and one woman, Heather Heyer, died, and 19 others were injured, after a white supremacist drove his car into a crowd of counter protesters. The Twitter account, Yes, You're a Racist, identified Peter at the march.

Since then, Peter has not renounced his views, making the past year very difficult for the Tefft family.

"My grandpa is very torn up about it," Jacob Scott Wieber, 27, Peter's nephew, told TODAY.

Wieber said it is very emotionally difficult for the family to stand up to Peter. What's more, Peter didn't believe the letter was authentic and that the family only wrote it so that "people wouldn't come after them with pitchforks." So Peter continued to attempt relationships with Wieber and other family members. Early on, Wieber spent time with Peter because he was afraid of his uncle.

"The first time he asked me to meet with him, I felt like I had to or else he would see me as his enemy," Wieber said. "We didn't talk much."

While most families might think they don't have to worry about dealing with a white supremacist relative, Wieber said it could happen to anyone. Peter wasn't always like this and the rest of the family does not hold white supremacist views. When Peter first shared troubling ideas, Wieber tried challenging Peter's views. But he never listened and Wieber believes it is now too late for his uncle. That's why Wieber urges others to talk family members if they notice even a slightly troubling ideological change.

"Look out for really glaring warning signs," he said.

According to Life after Hate, a nonprofit that helps people leave extremist hate groups, white supremacists don't just come from racist families. They are often abused, bullied, socially awkward and feel like they don't belong. White supremacist groups prey on vulnerable white people in their teens and 20s and give them that sense of belonging they want.

Wieber recalls that his uncle started off as progressive, but then started sharing a lot of troubling memes and talking about things he saw on 4Chan, an anonymous imageboard community. Soon, he promoted neo-Nazi ideals.

"It could progress at any speed," Wieber said. "I would say to parents to try to reach their children before they get (to extreme views)."

Stopping early could prevent ugly confrontations like the ones the Teffts continued having with Peter. He didn't get the hint and continued trying to see his family. That is, until he attended Christmas without an invite. The family asked Peter to leave, but he refused. Finally, Wieber and Pearce confronted Peter by reading the letter out loud, stressing that as long as he was a white supremacist, he was not welcome. This moment was very trying for Pearce.

"Peter ended up storming out. Prior to that he didn't really believe that he had been disowned," Wieber said.

After Christmas, the family changed the location of their annual Fourth of July party so Peter couldn't attend. They worry that he might act violently toward them. Right now, they hope he gives them space to heal from the upheaval of the past year.

"I think a lot of people have been afraid of him for a very long time. We were glad to have him out of our lives after Charlottesville," Wieber said.