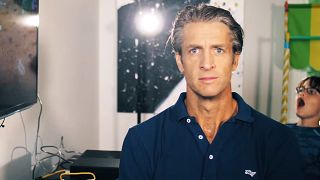 The Holderness Family. Time to put away FORTNITE?? Dad gets addicted   -   Copyright  YouTube
By Terri Peters  with TODAY Lifestyle  •  Updated: 14/08/2018

Ask any parent of a video-game-loving child and they'll tell you this has been the summer of "Fortnite: Battle Royale."

Things are no different in the North Carolina home of Penn and Kim Holderness, parents who post funny parody videos to their YouTube channel. The couple decided to make a video poking fun at their kids' summer addiction.

"The video idea came because some of my mom friends were commiserating that much of the summer their kids only communicated with other kids through headsets on the game," said Holderness. "Before you judge — some of these kids really came out of their shell and found real confidence on this game. We just wanted a fun way to talk about how much the game has affected our culture."

The parody, set to the tune of the Black Eyed Peas hit "I Got a Feeling," shows the duo pointing out to their kids, Lola and Penn Charles, that they've barely exercised all summer and have neglected all summer learning.

But, back-to-school is coming.

"Summer is ending," the couple sings. "So it's time to put down the 'Fortnite.'"

Holderness admits it won't just be her kids who miss the late-night "Fortnite" games once school is in session.

"My husband now enjoys it more than the both of them," she said. "So there's that."