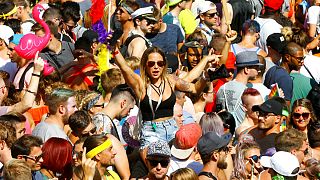 Circling around Lake Zurich, It’s one of the most popular house and techno parades in Europe and is officially billed as a demonstration for freedom, love and tolerance.

The first Street Parade was held on September 5, 1992, initiated by maths student Marek Krynski. He was inspired by a television report on the Berlin Love Parade and went to visit the German city to find out how the event was organised. It was attended by about 1,000 people.

The number seems paltry compared with the huge turn-out at recent Street Parades, but in 1992, it was regarded as a huge success as no one really believed that ravers would dance through the streets of the city in broad daylight. There were only two parade floats.