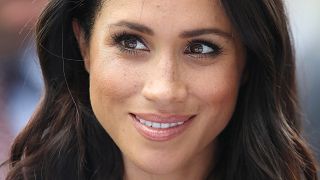 Talk about traveling in style!

Meghan, Duchess of Sussex, wore no fewer than four gorgeous outfits during her two-day visit to Ireland with Prince Harry this week. The whirlwind trip marked their first official international outing as a royal couple.

On Tuesday, the former Meghan Markle stepped out of the plane in a green Givenchy pencil skirt and top. She accessorized with neutral pumps and a roomy Strathberry tote.

She wore the ensemble as she and Harry met Ireland's taoiseach (aka prime minister), Leo Varadkar.

Later on, the duchess made a quick change for a reception at the residence of Robin Barnett, the British ambassador to Ireland.

She looked chic and summery in a sleeveless, belted dress by British designer Emilia Wickstead. She paired that look with matching black pumps and a black clutch.

On day two of her Ireland trip, Meghan returned to one of her favorite styles: the boatneck dress. She wore a gray boatneck dress with an asymmetrical draped skirt by French designer Roland Mouret as she met with Ireland's president, Michael Higgins, and his wife, Sabina.

Before long, Meghan had made another style swap into what might have been her most daring (and fabulous) outfit of the whole trip — a black pantsuit!

It was definitely a departure from the dresses and skirts she has worn since she joined the royal family. She looked every part the sleek, modern princess in the Givenchy ensemble.

She wore the pantsuit, accessorized with black heels and a simple clutch, as she and Prince Harry attended various events in Dublin. Harry also looked dapper in a gray jacket and trousers and muted blue shoes.

The royal couple saw the famous Book of Kells at Trinity College and also greeted athletes at Dublin's Croke Park, home of the Gaelic Athletic Association. (How did the duchess effortlessly navigate the soft grass in her heels? It must be a royal style secret.)

The duchess clearly made the most of her Ireland trip — and looked stunning in the process!