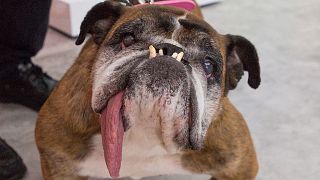 Zsa Zsa, the lovable English bulldog who was named the World's Ugliest Dog last month, has died at 9 years old.

The dog died in her sleep early Tuesday morning, owner Megan Brainard told TODAY. "She's been staying over at my dad's house. He woke up this morning and found her passed away," said Brainard, who called Zsa Zsa's passing "devastating."

Brainard and her husband, Jesse, spent most of Tuesday visiting a relative in the hospital, which has prevented them from fully "processing" Zsa Zsa's death. "I'm still in shock ... It's kind of like when she won (the World's Ugliest Dog contest). It's been two weeks and I still don't believe it. It's probably going to be the same with her passing," Brainard said.

"I picked Zsa Zsa up and took her outside and laid her down in the grass. We were all saying our goodbyes and and Mareslie went right over and gave her a kiss. It was sweet. She was waving at her," Brainard shared.

With her floppy tongue, crooked teeth and pink manicure, Zsa Zsa captured the hearts of the judges at the annual contest at the Sonoma-Marin County Fair in Petaluma, California.

Zsa Zsa seemed to relish the victory. "She knew she was special. She never really showed much excitement but yes, she was definitely living it up after she won," said Brainard.

Brainard brought the dog, named after actress Zsa Zsa Gabor, to TODAY on June 25, revealing that kids often gave Zsa Zsa's tongue a handshake like it was a paw.

Zsa Zsa's hanging tongue came from a pronounced underbite and crooked upper teeth that made it hard to keep her tongue in her mouth. Even with her offbeat looks, Zsa Zsa, like her Hollywood namesake, became accustomed to having her photograph taken.

"We take millions of pictures in my family, so now we have her face everywhere to remind us of her," she said.

Zsa Zsa had a rough early life, spending five years in a puppy mill in Missouri before being saved by the nonprofit Underdog Rescue. Brainard then became Zsa Zsa's owner after coming across her on PetFinder.com.

Many of the previous winners have been rescues, including last year's champion, a 3-year-old Neapolitan Mastiff named Martha.

Brainard drove 30 hours from her home in Anoka, Minnesota, to bring Zsa Zsa to the World's Ugliest Dog competition, which came with a $1,500 prize and a big trophy for first place.

Zsa Zsa beat out a terrier named Scamp and its scraggly dreadlocks and questionable odor to take home the title.

The contest is all in fun to raise awareness of adoption and show that all dogs are worthy of love, not just the good-looking ones.

All dogs go to heaven, no matter what they look like. Rest in peace, Zsa Zsa!