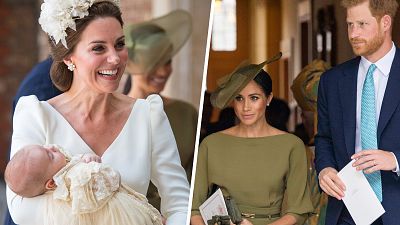 Kate, Duchess of Cambridge carries Prince Louis as they arrive for his christening service.   -   Copyright  AP
By Lindsay Lowe  with TODAY Lifestyle  •  Updated: 10/07/2018

The duchess and mom of three looked radiant in an ivory Alexander McQueen dress as she attended the christening of her youngest son at St James's Palace in London.

The former Kate Middleton topped off her look with a white headpiece covered in floral embellishments by designer Jane Taylor.

Meanwhile, Prince Louis wore a handmade replica of a christening gown made for Queen Victoria's eldest daughter in 1841. The original is now too fragile to wear, so the queen commissioned the copy from her royal dressmaker, Angela Kelly.

Meghan, Duchess of Sussex, also looked chic (as always), wearing a muted green Ralph Lauren dress with flared sleeves as she walked with Prince Harry. She accessorized her look with matching, olive-hued shoes and a hat by British designer Stephen Jones.

Kensington Palace shared a video of the royal family arriving at the chapel. Kate looked happy and at ease during one of her rare official appearances since the birth of Prince Louis.

Kate's sister, Pippa Middleton, was also in attendance, and looked lovely in an icy pale blue. The dress just showed a hint of her growing baby bump.

Kate sported a similar look for the christenings of her first two children. She wore a cream coat dress and a similar hat for Charlotte's christening.

The duchess also wore cream for the christening of her first son, George, sporting a higher-necked dress with a ruffle and leaving her long hair down and loose.

After Louis' christening, the Duke and Duchess of Cambridge are hosting a private tea at Clarence House, which is the official residence of William's father and stepmother, Prince Charles and Camilla, Duchess of Cornwall.

German woman charged with crimes against humanity and IS membership