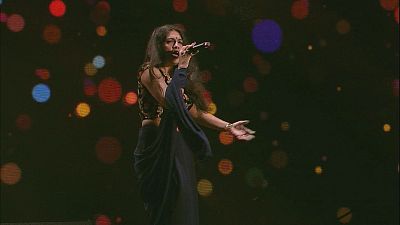 Over 30,000 fans flocked to the Star of Asia music festival, an international celebration of music, featuring exciting fusion music, performed in the scenic mountains above Kazakhstan's cultural capital Almaty.

The two-day festival (June 16-17), held annually in the Central Asian country as part of the celebrations for the Day of Almaty City, featured musical cocktails, such as opera + hip-hop and space jazz + electronic music performed by Kazakh and international pop stars, amidst fireworks and impressive light shows.

Performances took place in the ice-skating stadium Medeo, the highest skating rink in the world, at an altitude of 1,700 metres, with local folk metal group Ulytau opening the festival.

"The name of our group means Great Mountain in the Kazakh language," the group's violinist Issayeva Assel told Euronews," adding, "It is the place where the Kazakh Khanate was founded. So that's why there is probably a symbolic gesture in us opening this event.”

An alternative spelling of the word 'Kazakh' - with the letter Q - is behind the Q-pop genre of the boy band Mad Men. Their music is inspired by Korean K-Pop.

"Q-pop artists are different because we have fewer limits, we are less constrained on stage," Q Pop's Aron remarked. "This is the new wave; we hope that the whole world will like it and it will conquer the world. Q-Pop! Q-Pop," he enthused.

The Iranian-Swedish singer Arash was the festival's special guest. He rose to fame with the song Boro Boro, which he wrote following a difficult separation and briefly losing his voice.

"I always try to give people love with my music and just make people happy, even if it's just for five minutes a day," Arash told Euronews on the sidelines of the festival, adding "Then, I have done a good job. This is my mission in life.”

In 2007, the Russian girl group Serebro won third place for Russia at the Eurovision Song Contest. Since then, their popularity has rocketed - albeit with a different lineup of singers.

"Regarding the organisation everything is superb, we feel like princesses, we feel great," Serebro's Olga Yurievna Seryabkina noted.

“The music that you heard was, I want to say, a fusion of Indian music," she told Euronews, adding "We had influences of RnB, Jazz, Hip Hop. I have a killer band and they come from so many different kinds of backgrounds of music. We are just artists of today, which is relevant, and we just want to do this music."

The diverse line-up of the Star of Asia festival ensured the international appeal of the event, which was live broadcast to more than 100 countries this year spanning Europe, Asia and America.