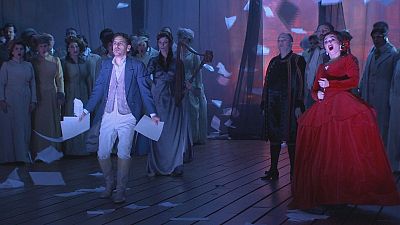 It’s a fantastical odyssey, a tale in which the real mixes with the imaginary – “Les Contes d’Hoffmann” by Jacques Offenbach. Legendary tenor Juan Diego Flórez.

He said: “I’m very, very excited because it’s my debut in Hoffmann. This is of course one of the diamond points of the French repertoire for tenor.”

After a wonderful opening night! Yesterday marked my debut in the title role of Les contes d’Hoffmann and I couldn’t be happier of singing in this production with great colleagues. pic.twitter.com/rxVO6ZsWh8

The late Romantic opera, staged in Monaco by Monte Carlo Opera director Jean-Louis Grinda, is based on stories by visionary writer ETA Hoffmann who becomes the protagonist of his own tales.

“La chanson de Kleinzach is a wonderful and very famous moment. He is kind of tormented and a bit crazy and he drifts away and starts speaking and singing about something else: about a woman.”

Four women trouble the poet’s heart: an opera star, a mechanical doll, a sickly singer and a courtesan – all parts composed to be performed by just one soprano.

Olga Peretyatko takes on this challenge, although remains undaunted by the sizeable task.

“These are my dream roles,” she said. “It’s a dream performance, where I can show different characters.

“You have to work with contrasts. When the colours change, straight away you become another character.”

Offenbach, who became famous for his sparkling comedies, always longed to be recognised as a serious opera composer.

Grinda, who is stage directing the piece, said this desire is can be seen in the opera.

He said: “This is a masterpiece which reflects, without doubt, a certain suffering. All his life he wrote comical pieces, operettes, things that make the Parisians laugh. He kept the great drama of being a misunderstood artist to himself.”

“Like Offenbach, Hoffmann is also trying to be taken seriously,” Florez agreed. “He is into the search of his poetry, of his talent. “In the end Hoffmann has achieved it, he has gained back his talent and he is recognized as I think Offenbach wanted to be.”