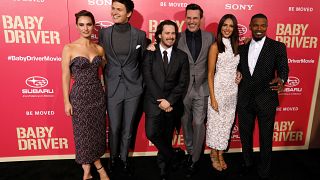 “Baby Driver” is the story of a young man who wears headphones to drown out his tinnitus – and they’re essential for his job.

Ansel Elgort plays the role of the getaway driver, propelled along by his own musical playlist which enables him to concentrate.

The action movie had its premiere in Los Angeles this week. As a child writer-director Edgar Wright suffered from the same ailment as the lead character. He says the soundtrack and scenes both inspired each other and he’s been working on the story for over 20 years.

“I think in a way it’s sort of surpassed what I dreamed up. I didn’t really finish this script until like six years ago so it’s something that’s been like building up in my brain for a long time,” he said.

Actress Lily James was impressed by her co-star’s driving skills: “He was amazing, he really did loads of training and he really pretty much all of it himself within reason and I felt very safe in his hands.”

The movie is on global release in the coming month.