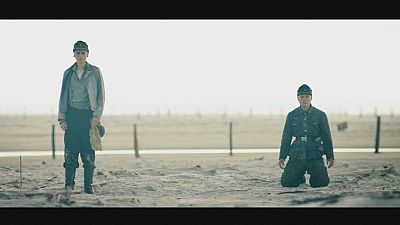 Beneath a vast expanse of sand on the Danish coast lie thousands of deadly land mines. What happens to them is the theme in the movie “Land of Mine”.

It opens a door into a dark corner of Danish history and has landed an Oscar nomination.

Foreign-Language Oscar Nominee ‘Land of Mine’ Puts Danish Cinema on the Map DanishFilm</a> <a href="https://twitter.com/NewDanishScreen">NewDanishScreenhttps://t.co/wzW8VoON9m

The film is set just after the Second World War and follows German prisoners who are put to the dangerous work of defusing the mines.

The director, Martin Zandvliet is looking forward to the annual bash which sees his film nominated in the best foreign film category.

“I want to stop and watch and be present and just feel it. It’s, as a filmmaker, it’s a big thing. It is still the biggest thing in the world and it is in the land of opportunities, you know. So I’m looking forward to it,” he said.

Most of those who were sent to defuse over 1.5 million of their own mines were young boys. They had minimal training and nearly half of them were killed.

It took the director four years to create the stories of the young men. Over the course of the film, the relationship between the POWs and the sergeant assigned to watch over them turns from one of hate to compassion.

“We talk more and more about building walls, building borders, closing down countries. That’s also why the title is ‘Land of Mine’ and why he shouts in the beginning, this is my land. Because Europe was supposed to be free open borders, bringing us closer together and it seems like the world is getting more and more divided,” added Martin Zandvliet.

The events on the Danish coast are considered by many as a stain on Denmark’s history and as such resulted in the director receiving hate mail.