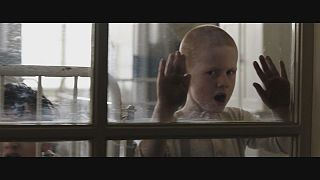 (He) thinks he is doing a really important job for the German people and he believes in his mission, he is convinced of what he is doing. And that's what's fascinating with this role: the man whom we see today as a murderer was doing no harm as far as he was concerned.

Based on Robert Domes’ 2008 novel of the same name, the film tells the story of 13-year-old Ernst Lossa, who was committed to a mental hospital in 1942 because of his Roma origins.

The hospital’s staunch Nazi chief physician Werner Veithausen is played by German actor Sebastian Koch, who shot to fame after starring in the 2007 Oscar-winning ‘The Lives of Others’.

He explains how he got into character: “For me as an actor, the challenge was to play a character whose alienated logic makes sense. That’s why there are no devilish smiles. Veithausen gets up in the morning and sees himself in the mirror and thinks he is doing a really important job for the German people and he believes in his mission, he is convinced of what he is doing. And that’s what’s fascinating with this role: the man whom we see today as a murderer was doing no harm as far as he was concerned.”

The film marks a return for director Kai Wessel to dark periods in German history, after his award-winning TV series ‘Klemperer’ based on the diaries of a Jewish literature professor during the Third Reich, and the TV drama ‘Die Flucht’, set in the winter of 1945, which was shown in more than 50 countries.

For him, casting the main character was key to the film’s success. “We saw a lot of actors – it was a huge casting process,” he says. “But very early, there was no question that Ivo [Pietzcker] was a hot candidate. We did a lot of improvisation because we wanted to be 100 percent sure he was the right choice and, in the end, we knew he was.”

Young Ernst soon discovers the truth behind the hospital’s facade and tries to sabotage its euthanasia programme to help his new friends. Ernst is played by young Berliner Ivo Pietzcker, who was the lead character in Edward Berger’s 2014 award-winning movie ‘Jack’.

“I am very interested in history and I read a lot of books, history books, so, yes, I knew about euthanasia, I wasn’t clueless about that,” says the young actor.

One way to kill the patients was to lace raspberry juice with poison. Another, invented by Dr Faltlhauser, whose real name was changed to Veithausen in the movie, was to feed the patients with vegetable soup that had cooked so long it no longer had any nutritional value.

“I am convinced that Dr Veithausen never considered himself as a criminal, rather he saw himself as part of a scientific avant-garde on a mission that he believed in,” says Koch.

“To invent food without any nutritional substance, where the patient believes he is eating but he’s actually dying of malnutrition, is a relatively humane way to die, I mean, of course, seen from the perspective of Dr Veithausen. He was proud of his invention and he was praised by the Nazis. He had the power to decide, when the euthanasia programme ended, who would die and who would live, and he could solve that issue in a very way humane way with typical German efficiency. Such perfidy is unbelievable.”

The real-life Dr Faltlhlauser was sentenced to three years in jail after the war and was pardoned by the Bavarian secretary of justice in 1954. He died in 1961.

Conservative estimates suggest that at least 5,000 German children perished as a result of the Nazis’ child ‘euthanasia’ programme.

‘Fog In August’ was released in Germany in October.