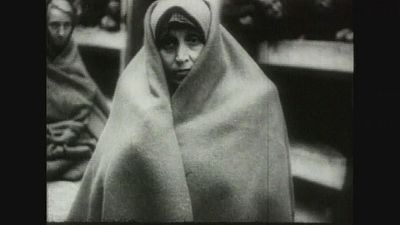 From beyond the grave the harrowing stories of the Holocaust are being told. The UK National Holocaust Centre in Nottinghamshire is in stark contrast to the horrors faced by those incarcerated in the Nazi death camps.

Now at the centre you can hear from 10 survivors who answered questions to 1000 questions recorded on 3D cameras. Voice recognition and a data base of over 1,000 answers play their part.

Chris Walker is the Managing Director of Bright White Ltd, which has been involved in the development of the technology for the centre.

“So I could ask for instance: “Steven, what is your approach to forgiveness?” he explained.

“Forgiveness is a long process because you start off with hatred and revenge and slowly you have to start altering those very strong feelings that you have inside you,” answered 81-one-year-old Steven Frank who was deported to the Theresienstadt concentration camp and is one of the survivors who answers questions.

Sarah Coward is the Development Director of the National Holocaust Centre.

“Children of the next generation will not have the opportunity to meet the Holocaust survivors it’s as simple as that. And we really needed and wanted to find a solution to that to really keep the connection between the children and that conversation they have with Holocaust survivors which is so important.

‘And what we found was digital technology now can provide a solution which will enable those conversations to take place in 20, 50, 100 years time,” she said.

Mala Tribich survived deportation as a teenager but her mother and sister did not.

The memories can be draining. Time has not lessened the pain of Tribich’s grief.

“I’m doing it, yes because indeed I want to see racism and antisemitism and discrimination and all these things that are so detrimental to society. I want to see them disappear,” she stressed.

Daniel Sugarman, a reporter from the Jewish Chronicle has visited the centre and put questions to the survivors.

“I thought it was extremely impressive. Obviously in the past you will have gone into auditoriums perhaps and seen videos of people giving over testimony, but the interactive experience it was quite remarkable,” he said.

You can have a virtual conversation with Holocaust survivors at the National Holocaust Centre in the East Midlands.