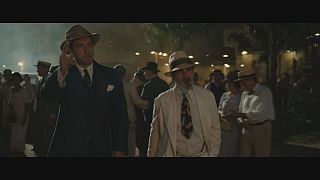 The plot unfolds around the American military veteran and police chief’s son Joe Coughlin whose life descends into the world of gangsters.He is played by Ben Affleck who also directed the movie.

“I wanted to make a classic Hollywood gangster movie the way they used to make when making a movie like this was about transporting you somewhere special, taking you to a different world, guns and hats and cars and suits, the whole thing,” explained the director

The film is marked by encounters with three women. There is of course the gangster’s moll, Emma who is played by Sienna Miller, a Cuban lady and a wannabe actress.

“I think people are sort of seduced by…there’s a violence and a glamour, certainly in the 20’s. Everything being shaded and covert and for me personally playing a gangster’s moll, this woman who really had no other choice but to be on the arm of a very dangerous man in order to survive really. It’s just fascinating,” said Sienna Miller.

Beyond money and power, even the threat of prison, one fate seems most likely for men like Joe: an early death. But until that day, he and his friends are determined to live life to the hilt.