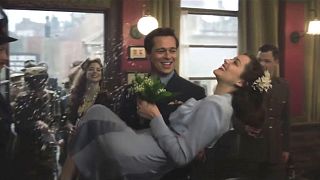 Much awaited romantic thriller “Allied” has opened in Paris, with the stars hitting the red carpet to boost the movie, which has also benefitted from much speculation about an on-set romance between the leads that may have blown up Angelina Jolie’s marriage.

Brad Pitt’s Canadian Intelligence officer meets French resistance fighter Marion Cotillard in WWII Morocco and falls in love, only to have the relationship tested once they attempt to build a life together during the height of the war.

“This one was more a universal story about, you know, about love about I would say trust. Trust in the person you love, trust in your intuition, trust in even the job you’re doing, the mission itself and that’s what I most liked about the script,” says Pitt.

The film’s central spring is will the couple’s strong relationship survive accusations that the beautiful Frenchwoman is a sleeper spy working for the Germans? Pitt faces a terrible choice; kill the woman he loves himself or to be executed for failing to obey orders.

Pitt called Cotillard “a great partner” in this movie.

“Marianne Beausejour is known to be the life of the party and I would describe Marion as very similar, very vivacious. It’s terrible to say these nice things in front of you. I’m not used to it,” he says in conversation with his leading lady.

Marion Cotillard: “Say it in French, I won’t understand anything!”

Brad Pitt: “A great partner because this is a definite two-hander and she definitely needs someone who can do the heavy lifting on certain days and specific scenes but a real gem. A real gem of a human being.”

Alliance rolls out this week and next worldwide.