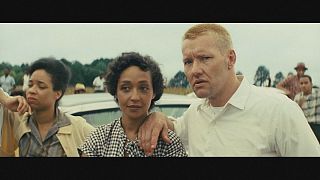 It is a tale as old as time itself… two lovers who can’t be together because society won’t allow.

It's really not a period film, it's very much a film about now

‘Loving’, based on a true story, dramatises the relationship between Mildred Jeter, a black woman, and Richard Loving, a white man.

The pair were arrested and jailed in Virginia in 1958, an era when miscegenation was illegal in 24 American states. The laws enforced racial segregation at the level of marriage and banned intimate relationships between members of different races.

The official cinema premiere was in Beverly Hills but the world premiere was at the last Cannes Film Festival (in the official competition) where the movie received standing ovations and very positive feedback from critics and the audience.

“I’m continuously floored by the amount of people posting online and saying ‘This is my story, this is my parents’ story’ or ‘I’m a product of an interracial couple’ or ‘I’m in an interracial relationship’. It’s pretty extraordinary this outpouring of relationships to this story and to see really what Richard and Mildred helped create in our country and our society in terms of really allowing the legality of interracial marriage,” said director Jeff Nichols.

Nichols, who also wrote the screen play, says he did not want to make a civil rights movie but show the racial ambiance in USA. This historic case went all the way to the US Supreme Court, which eventually struck down the laws against interracial marriage.

The female lead role is played by Ethiopian-Irish actress, Ruth Negga. Australian actor Joel Edgerton, who plays Richard Loving, believes that even though the film is based in the 1950s and 60s, it is more than relevant today.

“Only last year, June 26, the decision was handed down on marriage equality on same sex marriages in this country (USA) and you really think about it, it’s not that much of a different story. Two human beings doing something together in a private space that is non-threatening and non-destructive and yet they’re unable to do so. And it’s happening in my country right now. That decision hasn’t crossed the line so it’s really not a period film, it’s very much a film about now.”

‘Loving’ is on general release across Europe from February 2017.