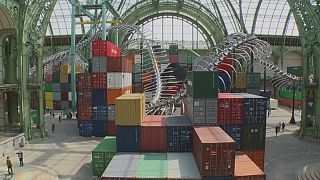 The curators at the Grand Palais in Paris like to think big. Since 2007 they have challenged contemporary artists to fill the vast space under its glass roof.

This year, the task of taking up the “Monumenta” exhibition gauntlet was given to Chinese artist Huang Yong Ping. He says his installation, called “Empires”, is a metaphor for the desire for power that is driving the rise and fall of nations and businesses in a globalized world.

“It is interesting to see that this exhibit is full of signs and symbols. For example, a snake might be a huge game of Go that is covering a territory; the containers might be seen as pieces of the Chinese game of mahjong and Napoleon’s hat is also a chess game. Here you have three elements that show that those games of power and strategy are those that make the show of globalisation. I would add that, of course, the containers are transporting wealth, but they are also transporting or protecting those who are unfortunate, and the space, the play between those two, is automatically interesting for an artist like Huang Yong Ping,” says curator Jean de Loisy.

Born in 1954, Ping relocated to Paris after the 1989 Tiananmen Square protests. He is the seventh artist to be invited to create a site-specific installation for the Monumenta exhibition at the Grand Palais following, among others, Anselm Kiefer, Anish Kapoor and Daniel Buren.

“My personal experience is a part of this project, but today’s world has its part in it too. This project can’t be disconnected from the reality of the world,” he says.

Visitors are confronted with 305 cargo containers towering around them, representing the power and impact of globalisation.

The snake’s 316 vertebrae and 568 cast aluminium ribs came from four different factories in France and one in China.

It took some 60 workers 11 days to assemble the various elements. The entire installation weighs 980 tons.

“When we are at ground level, when we walk next to cargo containers, we really can feel that something above us is oppressing us; overwhelming us, but when we go farther, if we go higher, you could have the feeling that you are watching a sort of a battle, as if we were on a hill, far away, and we feel secure, and helpless,” said one visitor.

“I think that the exhibition is also a little bit Zen, there is an aspect of meditation here and I like that, said another.

The exhibition runs at Paris’ Grand Palais until 18 June 2016.