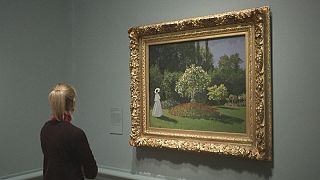 It has been a wildly popular exhibition, but now London’s Royal Academy of Art’s show, Painting the Modern Garden: Monet to Matisse is in its final days and you will have to rush to see it.

Despite that it is Monet and other continental impressionists at the show’s core.

“Monet was not only obviously a very great artist, but he was a phenomenal gardener and I think people often don’t realise just to what extent he was a really serious horticulturalist and a very knowledgeable botanist. And the garden and the art kind of intertwine throughout his career as a complete sort of symbiosis. So he’s the foundation of the exhibition and his working dates provide its chronological framework,” says Curator Ann Dumas.

Monet’s Giverny garden in Normandy was at the centre of his world, his water garden a moat with which to repel the horrors of WWI and the attendant brutalities of the industrial urban age.

“Monet is really the artist for whom the garden became a vehicle for expressing his feelings about the First World War. He was acutely conscious of it, his son and his stepson were both fighting in the war. Giverny wasn’t that far away from some of the fighting. On occasion he could even hear the gunfire in his garden,” says Dumas.

From the oasis Monet preserved by force of will and gimlet-eyed observation he produced some of paintings’ most enduringly beautiful works of art. The show brings, for the first time to Britain, all three panels of his renowned 1915-1926 Water Lillies triptych.

“Painting the Modern Garden: Monet to Matisse” runs until 20 April 2016.