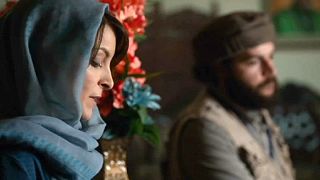 It's about this very, very serious place and serious things do happen in the movie, but it's also how people in those kind of situations cope...

Fey, who also produced the project, explains that it’s about how different people react in war situations.

Tina Fey, producer/actress: “It’s about this very, very serious place and serious things do happen in the movie, but it’s also how people in those kind of situations cope with humour and they get drunk and they have sex and they go wild because of the intense pressure that they’re under, and that’s kind of what the movie is about.”

Billy Bob Thornton plays a Marine colonel in charge of the unit in which correspondent Barker is embedded.

Thornton discusses what attracted him to the movie.

Billy Bob Thornton, actor: “The fact that it’s a movie that shows a different side of something that we see on the news every day was really interesting to me. I also love movies that blend humour with drama. I’ve always loved that.”

The film is released worldwide from March 4.