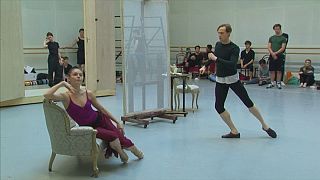 British choreographer Christopher Wheeldon has enlisted some of the Royal Ballet’s top stars for his latest production, Strapless, a ballet inspired by a painting that shocked 19th century Parisian society.

I fell in love with the painting at the Metropolitan Museum in New York and really was intrigued by so many of the things that made the painting a scandal...

John Singer Sargent’s Portrait of Madame X was unveiled in 1884 at the Paris Salon (Salon de Paris) where it scandalised audiences with its sexual allure of a woman in a dress with thin shoulder straps.

A preparatory sketch had the model with one of the dress straps missing, exposing a naked shoulder. The portrait was deemed too shocking to show publicly and even though Sargent quickly changed his work and repainted the strap, the negative reaction from the public was widespread.

Chistopher Wheeldon, choreographer and artistic associate of the Royal Ballet explained: “I fell in love with the painting at the Metropolitan Museum in New York and really was intrigued by so many of the things that made the painting a scandal: her stance, the way that her skin tone made her stand out from the darkness of the background, her curves…”

The subject was married socialite Amelie Gautreau, a beautiful young woman who had become the talk of the town. After the painting went public she was ostracised and abandoned by her husband.

Royal Ballet principal dancer Natalia Osipova, who plays the role of Amelie, understands how powerful the emotions were: “For her this was a personal tragedy. Looking at it now it might seem like something trivial, silly, or even ridiculous. But the more I looked at what happened, the more I understood what a real tragedy it was. When someone has a strong will to achieve something but then society rejects this and discards it.”

Edward Watson, who plays the role of artist Sargent, said: “I think it’s interesting that everybody involved is sort of victims of the work, of the piece of work (the painting), so it’s everybody’s reaction to that work which changes their lives. You know, he’s painting something which he thought was going to be great, she (Gautreau) was posing for something which she thought would be the perfect portrait of her. So the interesting thing is… it’s what that work did to everybody.”

The production is Wheeldon’s eighth work for the Royal Ballet.

Strapless premieres on February 12 at the Royal Opera House in London as part of a Wheeldon triple bill that includes After the Rain and Within the Golden Hour.