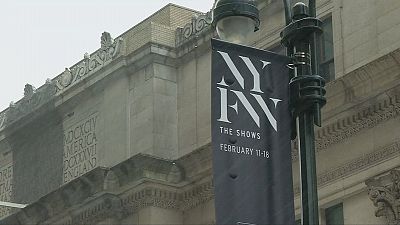 With one day to go, final preparations are being put in place for New York fashion .. The Shows.

Technology has helped to change the guest list at this event from fashion elite to include social media stars.

Where once the art of blogging was frowned upon, now fashion houses are turning to them for help.

Brooklyn based fashion blogger Kela Walker started her website in 2013 and is now a regular at events during the week.

“Originally you saw where bloggers were sort of scoffed at at New York Fashion Week, if you will. And it was sort of “oh, the bloggers,” says Walker.

“But now you see bloggers in the front row right along with the editors if not, in front of many editors.

“Bloggers are being pulled in to cover backstage because they are giving a point of view that editors can’t.

“We are going home and we are reporting on this tomorrow and an editor from a magazine, if you will, has to wait a couple of months to put something like that up.

Leandra Medine started her blog in 2010 as a hobby. Now the 28 year old employs nearly 20 people.

The New York native said preparing for fashion week is one of her favorite parts of the job. She was also pleased that bloggers were finally being recognised.

“I think that bloggers represent a pipe dream that was really difficult to see actualised, said Medine.

“And so the fact that so many young people with opinions and ideas on fashion have been able to rise to the top of this industry that has historically seemed so impenetrable is really, really inspiring and motivating.

“You sort of see yourself in the sort of digital superstars of fashion and that’s a really special sentiment to share.”

New York Fashion Week: The Shows will run from February 11-18.