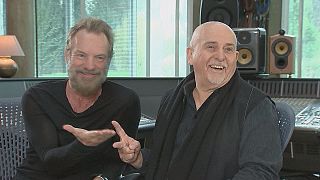 Sting and Peter Gabriel are joining bands and songs for a joint headline tour across North America and Canada later this year and the duo promise the vibe will be “playful”.

The idea was Sting’s though the two travelled the globe playing Amnesty International gigs back in the ’80s.

Sting and Peter Gabriel will join forces this summer for a month-long tour https://t.co/HfxesPUCscpic.twitter.com/uNgkZNRzlz

“I did a very successful tour with Paul Simon about a year ago – we toured Europe and America – where we traded songs, we traded musicians, we sang together and the take home that people got from that was that they loved it when we did things together. So, I thought I’d like to do that again. Who would I do it with? And Peter was on a very short list of people, because I knew him, because we’d worked together before,” Sting explained.

“He’d tried every other one…” said Peter Gabriel

“Every one said no,” joked Sting. “But I was still available,” responded Peter Gabriel.

“We’d worked together on the Amnesty tour in the ’80s, on two big world tours, so we knew we got on. We like each other’s music and I suggested the idea to Peter and, eventually, he acquiesced, after a bit of arm-twisting,” said Sting.

The veteran musicians will perform their most popular songs. There has been no talk from the duo of any new music being written as a result of the tour…yet!

“We want to sing a lot of hits basically. People want to hear us sing the songs we’re famous for. But, it’s always interesting to trade a song, to say ‘take that one’. So I am not precious about giving him whatever he wants,” said Sting.

“I always have to be a little drunk to go to a song-swapping party,” quipped Peter Gabriel.

They joke they’ll be making all decisions by playing the game “Rock, Paper, Scissors” – the name of the tour.

“Rock’ makes the music, ‘paper’ is an offer we can’t refuse and ‘scissors’ we do the business and then we’re off,” explained Peter Gabriel while Sting concluded: “It’s the perfect game, actually, because no one can have dominance.”