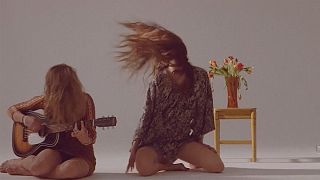 New York duo Beau is about to release its debut album and cannot wait.

Considering Emma Rose and Heather Boo, both in their early twenties, have been working on it since the age of 13, that’s easy to understand.

The public has already been given a taste of what’s to come with the single ‘C’mon Please’, lifted from their self-titled EP.

“Putting this album out will just be such a relief and a release of some kind of tension, because we’ve just been playing these songs so much and wrote them at such an innocent, pure time of our youth, and just getting them out will be really awesome, and moving onto the next album will be even better, because we’ve just been writing so much since then,” says the band’s Emma Rose.

The girls, who have been friends since childhood, taught themselves to play the guitar as teenagers watching tutorials on YouTube.

“We started on guitar and just writing poetry and writing melodies and stuff and when we got to the studio we were like, ‘How are we going to translate this and make it bigger?’ So it suddenly became this full band sound and, like I said, we just did it live and it was just what came out in the moment really,” says Emma Rose.

Their sound has been described as Seventies-influenced folk, leading to comparisons with artists like Patti Smith and Chrissie Hynde.

“It’s funny though, because with the Seventies – we never think of the Seventies when we write, ever, in our style. I think it’s interesting to hear that. But it’s definitely one of our favourite time periods, for sure,” says singer Heather Boo.