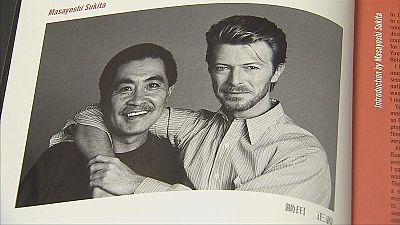 Around 30 photos are on display at New York’s Morrison Hotel Gallery, which chronicles their four decade relationship, which began when they were introduced by Lou Reed :“After I saw the joint concert with David Bowie and Lou Reed, which I really enjoyed, I showed David my portfolio. He gave me the opportunity to shoot him.”

Bowie studied mime under British actor, dancer and choreographer Lindsay Kemp and Sukita was impressed by the way the musician moved.

“We had a translator only in the beginning. I was able to say simple sentence like, ‘please sit here,’ or ‘please stand here.’ Once the shooting started he already knew what to do on the set.”

‘The Watch that Man’ session with clothes designed by Kansai Yamamoto saw Sukita photograph outfits by his compatriot modeled by Aladdin Sane.

Sukita has compiled a limited edition book of thousands of photos of Bowie entitled ‘The Speed of Life.’
The tour goes back to Japan in February before ending in Italy in Spring next year.