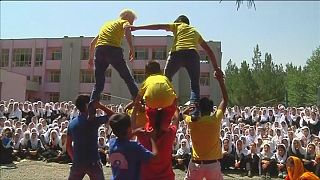 Visiting internally displaced persons camps and orphanages the project has grown so popular it now runs centres in ten provinces to spread a little joy in the war-torn country.

“We are all tired of war,” says one Afghan schoolgirl attending a performance. “We have enjoyed this entertainment programme. We wish to have peace and security in our country so we can have more fun and this kind of amusement in our life.”

The circus was opened in 2002 to help children orphaned and traumatised by the conflict.

Many of the instructors are orphans themselves.

“I ask children to come and learn circus tricks and ignore the war,” explains one of the members, Suraya. “Circus is a joyful art I am sure by doing circus tricks children will forget all the pain of war and panic they have in their minds.”

The performances would have been deemed ‘heretical’ under the Taliban, with music being banned, and girls being forbidden from performing in public and attending school.

Founded by Danish dance instructor David Mason, the circus is one of few projects expanding despite a drop in international aid to Afghanistan.

Clowning around is combined with essential messages such as health, landmine awareness and the importance of going to school. The circus continues its work despite fears over a Taliban resurgence following the withdrawal of US troops from the country at the end of 2014.